A curious suggestion by the Danish Prime Minister 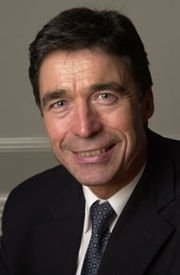 Last Friday the Danish Prime Minister, Anders Fogh Rasmussen, made a speech at the Copenhagen University, which was billed as “A Europe of Results”. As readers of this blog know, we are admirers of the Danish Prime Minister for his firm stand on such issues as freedom of speech and the war against terrorism. We were delighted when he won another election last year. But really – a Europe of results! Sigh.

While he talked a bit about the need to go forward in a more sensible way than that dictated by the Constitution, he seems to have concentrated on the problem of the next wave of enlargement.

“We need to consider EU's ability to absorb new members much more critically. This relates to EU's ability to make decisions, create common policies and popular support for the EU project.”

One is not quite sure whether the implication there is that it is the new members that lack popular support for the project or the old ones. What this apparently sensible analysis does not take into account is the need for the European Union to keep expanding in order to survive. There are never any alternative ways of dealing with neighbouring countries. And, of course, there are ever fewer neighbouring countries to deal with.

Mr Rasmussen has come up with a solution of a kind for the remaining states (mostly in the Balkans) that are hoping to get into the EU. At least their leaders want the countries to get in.

“Rasmussen suggested that prospective countries such as Albania, Bosnia, the Ukraine and Belarus could join the common economic market and achieve a degree of political influence.”

He then outlined what he called his vision:

“I envision us moving toward a more pan-European economic area. An area with free trade and economic cooperation between the EU and its neighbouring countries.”

That being so, why cannot the EU in general become “an area with free trade and economic co-operation” and, while we are at it, expand that to include some other countries in the world as well.

The speech was clearly aimed at the very many Danes that are having serious doubts about the whole project. As Søren Espersen, Danish People’s Party’s foreign affairs spokesman said:

“This sounds extremely exciting, and it sounds as if the prime minister is headed in a direction where the EU will be more edible for Danes.” [I expect the word he was looking for was palatable.]

There is a slight problem with this vision. In the past countries were told that they would not be able to have political influence unless they joined and accepted the entire acquis communautaire. Will there not be a certain amount of resentment if that situation changes for some?