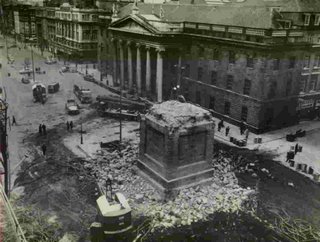 Not a few newspapers are taking the opportunity of Easter to mark the ninetieth anniversary of the Easter Rebellion, the armed uprising of Irish nationalists against the rule of Great Britain in Ireland.

After centuries of discontent, the uprising occurred on Easter Monday, 24 April 1916, centred mainly in Dublin. The chief objectives were the attainment of political freedom and the establishment of an Irish republic.

It takes an editorial in The Irish Examiner, though, to make the obvious point.

As we approach the 90th anniversary of the Easter Rising, it says, the Taoiseach appears rather hypocritical in celebrating Irish independence while his Government supports the EU constitution which would virtually annul the powers of the Oireachtas.

Instead, the leader declares, we would be governed by the EU commission, which is "anti-democratic, bureaucratic, unaccountable and endemically corrupt." It continues:

Anyone who dares oppose an EU treaty in Ireland is branded anti-European whereas the real anti-Europeans are people like Jose Manuel Barroso who seek to create a federalist superstate built on US-style free trade policies which increase Third World poverty and the militarisation of the continent for the resource wars of the 21st century.

The voters in France and Holland have bought time for the sovereignty of European states, but one must fear that this constitution will eventually be ratified with or without the support of the citizens the EU is supposed to represent.

The paper could have made the point that, with or without the constitution, the Irish government – in common with ours – has already surrendered much of its powers to the "anti-democratic, bureaucratic, unaccountable and endemically corrupt" EU commission.

Perhaps it is time for another Easter Rebellion. Next year would be fine, to mark the fiftieth anniversary of the Treaty of Rome.