A plague on your houses 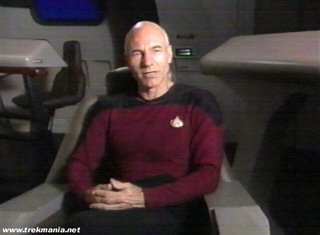 All of a sudden – well, not sudden, really – one tires of the Boy King, of UKIP and of the whole damn lot of them.

Alright, Francis Maude has said that the Conservatives may not win the general election, and then come back defending his action, having another tilt at UKIP. And UKIP is having another go at the Tories, and so on.

In the meantime, Tony is having a go at Gordon, or not as the case may be, and the media continues to follow the soap opera with gay abandon, obsessed by every move in this long drawn-out drama. And somewhere, in all that are the Lib-Dims… and who the hell cares? Not just Lib-Dims - the lot of them.

Then, to my horror, I receive an e-mail from NuLab, signed by starship Captain Jean-Luc Picard, aka Patrick Stewart, defender of the Galaxy and scourge of the Borg. He tells me that he has been a life-long Labour supporter. Not only that, he is patron of the Labour Supporters Network. Never again will I watch Star-Trek, the next generation.

The point, though, is that they've become self-obsessed. Whether it is Conservative Home, UKIP Forum or the many other political sites, they are all indulging in the equivalent of the child screaming, "Me! Me! Me!", oblivious to the fact that people are only interested in political parties to the extent that they are interested in issues that concern them.

And if political parties are only interested in themselves, pretty quickly they become mutual admiration societies, talking to themselves.

Take one small f'rinstance… this morning on the radio I heard the Boy King blathering about how Tory councils had the best record for recycling. Well, not here in bloody Bradford they haven't, and we have a Tory council.

For paper recycling, they've issued us with wheely bins, identical to the dustbins but for the dark grey colour instead of green, collected monthly instead of weekly.

About half the residents use them as ordinary dustbins, whereupon the rotting contents remain uncollected, the bins sporting "contaminated" stickers applied by diligent council workers. For the rest, well... they remain uncollected. Last time because they forgot and this time because the workers were on strike for better pensions. So we end up transferring the soggy contents to the ordinary bins in order to get rid of them.

But not from the Boy King will we hear that the ridiculous system is EU-inspired and, until the Brussels empire interfered, we had a perfectly effective means of recycling paper, which incidentally funded the local Scout movement. No, for the Boy King, this is an opportunity to preen, to tell us that the Tories are better than Labour, are better than the Lib-Dims, are better than…

A pox on your party, Mr Cameroon, and a pox on Mr Patrick Stewart and his Labour Supporters Network. A plague on all your houses.