No wonder we are in such trouble 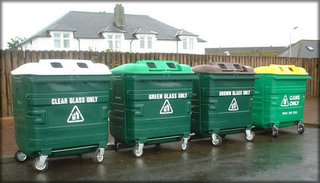 Danny Kruger is supposed to be one of the brighter writers on The Daily Telegraph staff and today he writes on the theme, "If councils had real power, people wouldn't dream of voting BNP".

That is hardly a novel idea for our readers as we said as much last Friday, with the words:

However, the idea warrants repetition and it is good to see Kruger catching up. But what is not good to see is the following commentary:

Simon Heffer, in these pages on Saturday, pointed out that the local Conservative campaign for "better composting" will hardly send voters rushing to the polling station.

But the fact is that waste disposal is about the only thing in which the council has a free hand. If candidates offered policies on the issues people really care about - more money for schools, say, or more police, or a new hospital, or increases in benefits, or more housing, or the opposite of these policies - they would be lying.

Can this man really mean it when he says: "waste disposal is about the only thing in which the council has a free hand."? Can he really be that ignorant? Has he never heard of the Landfill Directive, or the Waste Framework Directive?

Is he totally unaware that waste disposal policy, whether composting, recycling paper, or whatever, is totally defined by the EU and that local authorities are committed to an expenditure of £10 billion just for the infrastructure requirements of the latest tranche of EU laws?

When you get a Telegraph writer displaying such almost unbelievable ignorance, it seems there is no hope left. No wonder we are in such trouble.