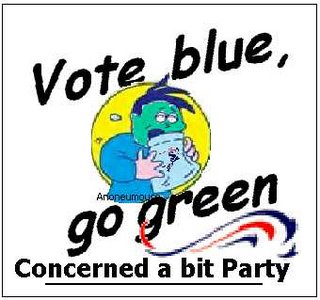 I reckon the headline to Rachel Sylvester's piece in the Telegraph today is spot on. "Voting for the BNP is about rage rather than race," it proclaims, a notion which entirely accords with my experience.

Sylvester then spoils it all by writing the piece underneath, positing that the motivation is "fear of change". This, she writes, "remains a powerful force". But then she did not write the headline.

The central theme though, is correct. Generally, people neither know nor care about the details of BNP policies, and certainly have no expectations of the party sweeping to power. Voting for them is simply an opportunity to put two fingers up to the political classes, reciprocating the contempt that they so obviously have for us all.

More to the point, it is a way of telling the Boy King what to do with his own, newly emergent BNP – the Be Nice Party – and where to stuff his "green revolution".

And there could be no better illustration of how firmly the Boy King has imbedded his head up his own backside with a slogan that is almost magnificent in its utter vacuity - "vote blue, go green".

Courtesy of the BBC, we also see how this brainless Tory Toff speaks to the "people" whom he so earnestly wishes to lead.

Prior to helping distribute recycling boxes to residents (i.e. posing for a photo-call holding a plastic box), he told reporters in Brentwood, Essex, that he wanted to see what he called "green growth" - a combination of economic growth and a sustainable environment.

"Some of the green lobby and a lot of the media tend to look at the environment and climate change as, look you've got a binary choice, you can either have economic growth or you can have a sustainable environment, and the truth is we've got to have both. We've got to have green growth," he says.

The trouble is chuck, we've got a "binary choice" when it comes to a vote. And you ain't it.