The rioters have it 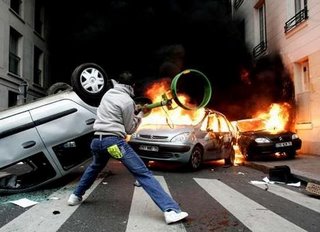 L’Escroc Chirac has announced that the new law (so new that it has not even been unpacked) to deal with youth unemployment (the CPE) is to be scrapped and other measures to tackle the problem will be introduced.

Various conclusions are to be drawn from this. The first and most obvious one is that Chirac has decided to throw de Villepin to the wolves though at this stage it is not entirely clear whether the man will resign or not.

Secondly, to the question of who runs France the answer is undoubtedly whoever torched the cars last night. If the spoilt denizens of the Sorbonne can get away with it (supported by the trade unions, to be fair, as ever intent on their own selfish interests) then why shouldn’t the unemployed of the banlieus, both French and immigrant, have another go?

Thirdly, the question of whether France is ready to enter the twenty-first century, to use that rather hackneyed phrase, has been answered by a resounding NON. Whatever it is they are against it.

That would not matter but for the baneful influence France has on all developments in Europe, partly through her refusal to let go of the sclerotic structure of the EU and partly by presenting herself as the country that speaks for the rest of us.

If the French want to wreck their economy, continue with a corrupt political system and support every dictator and terrorist in the world, provided they are anti-American, that is fine. What does it have to do with us or, indeed, any other European country?