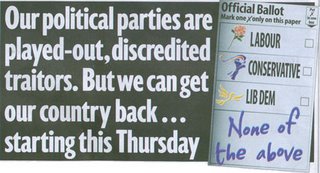 It is not possible even to begin summarising the torrent of ZaNuLab's hostile press this morning. One response from a correspondent, though, tells us, "I think we're all weary with talking while everything collapses around us... People want action but there's no leader."

Peter Hitchen in the Mail on Sunday gives us his recipe, with the panel to his column illustrated. Contrary to the leader in his own paper – which wants us to vote Conservative (we would if there was a Conservative Party to vote for) - he wants us to turn out on Thursday and mark our ballot papers "none of the above".

That's all very well, but spoiled votes are not even recorded, so that is largely a futile gesture.

The futility of that gesture, though, it is matched only by the process of casting a vote. As Booker points out in his column, the loathsome Johnny "three shags" (and counting)Prescott has so emasculated the political process with his "code of conduct" and “standards board” that elected councils are no longer able to function as representatives of the people who are foolhardy enough to vote for them. 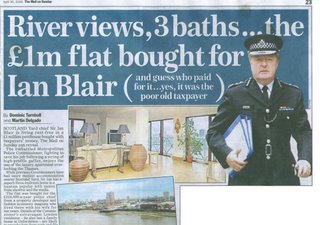 For some "public servants", however, times are good, witnessed by the Mail on Sunday which records Plod Blair enjoying the extraordinary fortune of living rent-free in a £1 million penthouse bought with taxpayers’ money. This is the man who regards a 16.6 percent crime detection rate as a good news story. Rushing to the polls here, of course, will make all the difference.

But, what comes over, even through the "noise" on the ZaNuLabour creeps is just how useless the Boy King really is. He should be storming the ramparts, yet is struggling to creep a few points ahead in the polls. Both YouGov in The Sunday Times and BPIX in the Mail on Sunday put the Tories at 35 percent, compared with Labour's 32 percent, a staggeringly poor result considering how unpopular Blair's government has become.

Even if these numbers are taken at face value – ignoring the inaccuracies in methodology - and applied to a general election, Labour would still take the majority of seats in Parliament.

While comparisons are being made with the last days of the decaying Major government, The Business sums it up, saying that the Labour government has one big advantage. By the mid-1990s, it says, "the Labour opposition was demonstrably ready for power; a decade later David Cameron's Tories can barely claim to be a functioning opposition."

Mr Blair's "Black Wednesday" (all the scandals came together on 26 April) was the Cameron Tories first major test; they flunked it. Shadow Home Office minister David Davis did a decent job of holding Mr Clarke to account, but Mr Cameron’s performance at Prime Minister's Question Time on Wednesday, when he had Mr Blair on the ropes, was limp-wristed; most other senior Tories have been missing in action. The media is still doing the Tories' job for them in holding Labour to account.

But what is fascinating about the polls is the rise of the minority parties, standing at approximately 15 percent. This includes a significant tranche of BNP support, but again, the Tory response is less than sure-footed. According to Melissa Kite in the Sunday Telegraph, Eric Pickles – formerly the detested Bradford Council leader, now Conservative deputy chairman and local government spokesman – declares:

We are not differentiating between the candidates who stand for the BNP and the people who vote for them. We believe it is a shameful act to vote for the BNP, no matter how badly you feel you have been let down by Labour. These people are motivated by race and it is not an acceptable use of a protest vote to vote for the BNP.

This is as bad as branding UKIP members as "fruitcakes", if not worse. The arrogance of telling voters that their choice of a legitimate political party is "not an acceptable use of a protest vote" almost takes your breath away.

On the other hand, what else have the Tories to offer? Good opposition, says The Sunday Times, means "putting the government on the rack". Labour, it says, "was merciless in making life even more uncomfortable for the Tories a decade ago. Mr Cameron’s Conservatives need to do the same."

But, even as it fails to do precisely that, a commentator, Jack Stone, says on the Conservative Home site, "if you don't like the way the Conservative Party is heading than my advice is simple. Sod Off!!!".

That, amongst a certain faction of the Boy King's acolytes, seems to be the central message to the "non-believers", and is one of the most powerful strains amongst the "noises off". Despite the utter dereliction of ZaNuLabour, an awful lot of people are going to take his advice.