Statists all hang together 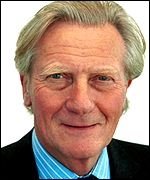 Stephen Pollard has an excellent piece in the Times, reprinted on his blog. In it he manages to take to task Lord Heseltine who appears to have given a particularly idiotic interview to that newspaper, the Conservative Party, the Labour Party and assorted European politicians. Not bad for one article.

“In his interview with The Times yesterday, he berated his own Conservative Party for talking about the public sector as “a bloated, badly run, inefficient impost on the taxpayers’ back”.”

“The elder statesman of the party first managed to accuse it of doing something it doesn’t — but which it should. Then he dismissed as a baseless caricature a view of the public sector that is wholly accurate. Quite a feat.”

The truth is that the public sector is bloated, is badly run and is an “inefficient impost on the taxpayers’ back”. What is a supposed Conservative doing defending it or pretending it ain’t so?

“About the only firm policy announcement made by David Cameron has been to commit the party to unending support for the NHS. The Conservative Party simply does not refer to the public sector in hostile tones. Would that it did.”

We all would that it did, but then we all would that the Cameroonite modern compassionate Conservative Party did many things, such as displayed the conservative principles of individual freedom, small government, law and order, national independence, strong defence, and constitutional democracy.

Instead we get feudal paternalism masquerading as modern compassion. But I digress.

As Stephen Pollard points out:

“It is no wonder that the leitmotif of Lord Heseltine’s career has been his Eurofanaticism, since his embrace of public sector corporatism is of a piece with his fellow Europhiliacs.”

France may be the worst example of an unreformable economy, completely in hock to its public sector. But we are not far behind.