Just in case something was done 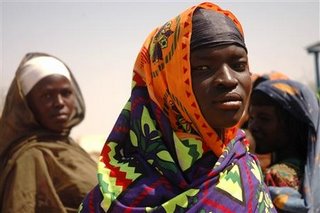 One of the Pulitzer Prizes has gone to Nicolas Kristoff of the New York Times for his reporting from Darfur and making the horrors of the place known to the American public. Very admirable, but as the American Thinker asks, will the NYT, a virulent opponent of John Boton’s give the latter credit for actually trying to do something about the situation.

Mr Bolton has called for UN sanctions against four named Sudanese officials accused of genocide and various slightly lesser crimes. This would send out a signal, if nothing else, that the UN was prepared to tackle the worst humanitarian disaster at the moment and to deal with the individuals responsible for it.

It will not happen. Russia and China have already announced that they would oppose any sanction against anybody in Sudan, speciously expaining that the situation with regard to the African Union negotiations was delicate and this was no time to start imposing sanctions.

As Radio Netherlands puts it on its English language website:

“The Chinese have said they don't want to interrupt the peace talks currently underway in Abuja in Nigeria, and Russia too has called the situation 'fragile'. However, some observers have pointed to the fact that both China and Russia are Sudan's largest arms suppliers. Peter Mosynski is a contributor to the UK-based Sudan Update. He believes there's another motive too:

"Sudan is very crucial right now to Beijing's search for additional sources of oil for its rapidly industrialising economy and both Russia and China are rather against the idea of countries being indicted for their human rights records. Neither has too clean a record themselves."

The deadline for the completion of the AU negotiations is April 30. One wonders if the UN will bother to impose sanctions then.