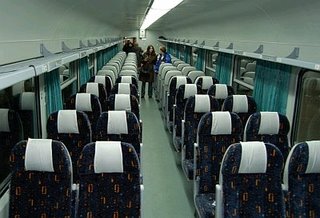 Thank EU, British taxpayers, thank you very much, and all you other suckers in the EU member states who have paid into our coffers.

It was really very kind of you to modernise our railway carriages, 81 of them so far, used by PKP Regional Railways - and at a mere €18.3 million, it was an absolute bargain… for us.

Our workers in the FPS H. Cegielski plant are also very pleased too, as they got the refurbishment work, after the contract was signed in December 2005 and especially happy are the residents who live along the Kraków - Kołobrzeg route, who will benefit from the replacement of the whole interior design, the imporved thermal and acoustic isolation, the new windows and new modular toilet cabins.

We also like the anti-graffiti protection layer and the money to turn 24 of 81 cars into non-compartment cars adapted for the disabled.

Most of all, though, we are all so happy that the money is to keep flowing. Two other contracts have been signed so far, one in June 2005 for a consortium of three rolling stock manufacturers - ZNTK Mińsk Mazowiecki, PESA Bydgoszcz Holding and NEWAG Nowy Sącz – to modernise another 75 trainsets, at a lovely cost of €41.6 million – for which we will not have to pay a single cent.

These will serve the Warsaw - Łódź route and are scheduled to be delivered by November 2007.

All of that lovely money that has made it all possible has come from that lovely European regional development funding, to which you lively people so willingly contribute – which was why we were so keen to join that lovely EU in the first place.