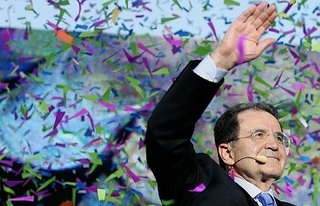 Early reports, based on exit polls released this afternoon, indicate that former EU commission president has beaten the incumbent Silvio Berlusconi in the Italian general election.

Speigel online says that the exit poll, taken by Nexus for public broadcaster RAI and private broadcaster Mediaset, shows Prodi's alliance gaining between 50 and 54 percent of the votes in both houses of parliament, compared to only 45 to 49 percent for Berlusconi.

Prodi's coalition is slated to gain between 159 and 170 seats in the Senate, compared to 139 and 150 for the center-right, although there is no information yet on the lower Chamber of Deputies. A separate poll taken by Piepoli for Sky Italia television, however, showed Prodi winning 52 percent of the vote in the lower house.

This will be the first time ever that a former EU commission president has moved on to become a prime minister in his own country. However, for Prodi – to say nothing of the Italians – this is likely to be a mixed blessing. While a more "European" stance might be expected, The Times, amongst others, suggests he is likely to lead a "motley" coalition that is unlikely to last.

The coalition embraces social democrats, centrists, Catholics, Greens and Communists, and much will depend on the final spread of votes in what is, by all accounts, a highly complex proportional representation voting system.