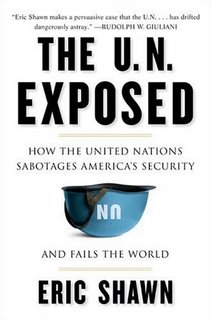 There are times when I feel that it is time Godzilla met the UN or, failing that, Abbott and Costello. Still, here is one book I would like to read: “The U.N. Exposed : How the United Nations Sabotages America's Security and Fails the World” by Eric Shawn, “senior correspondent and anchor for the Fox News Channel. He has covered stories everywhere from the Persian Gulf to Somalia to the White House to the O. J. Simpson trial.”

It sounds a jolly read:

“The U.N. Exposed will give you a rare insider's tour of the United Nations, focusing on many disturbing aspects that have been ignored by the mainstream media. You will learn, for instance:

- how U.N.-supervised funds were diverted into weapons used against American troops

- how kickbacks, bribes, and corruption have pervaded the highest echelons of the U.N.

- how U.N. ambassadors and staff enjoy luxurious and tax-free Manhattan lifestyles and other perks

- how U.N. workers have repeatedly turned children into their sexual prey”

Item 3 sounds particularly interesting. I wonder (says she disingenuously) whether among those “allies” there is anything about various European countries.

In the meantime the State Department has announced that the United States would not be a candidate in the first election for the new(ish) Human Rights Council, which is meant to replace the old Human Rights Commission. The Council that, supposedly, will avoid having really gruesome violators of human rights on it, was voted in overwhelmingly last month. (See item 3 in that list above.)

For some reason, various, usually sensible Democrat and Republican Representatives and Senators are dissatisfied with this decision.

“The U.S. announcement on Thursday was unexpected since American officials last month approved the budgeting of the council and pledged to support it. In addition, many congressmen, including some of the United Nations' harshest Republican critics, had joined rights groups in lobbying the Bush administration to make the United States a candidate.

"This is a major retrenchment in America's long struggle to advance the cause of human rights around the world, and it is a profound signal of U.S. isolation at a time when we need to work cooperatively with our Security Council partners," said Representative Tom Lantos, the leading Democrat on the International Relations Committee and a co-chairman of the Congressional Human Rights Caucus.

He said that the failure to push for the 96 votes needed for acceptance "projects a picture of profound weakness in U.S. diplomacy".

Among the Republican critics who had counseled joining the panel despite its acknowledged flaws were Senators Norm Coleman of Minnesota and Richard Lugar of Indiana, the foreign relations committee chairman, and Representatives Christopher Smith of New Jersey and Henry Hyde of Illinois, who is chairman of the House international relations committee.”

There is some suggestion that the US was afraid that it would not muster the required 96 votes because of “revelations of abuses of detainees in Iraq and of clandestine prisons abroad”. That may well be true, though I have no doubt that countries such as Cuba or Iran, both standing, will have no trouble in being voted onto the Council.

The talk about this being a failure of John Bolton’s diplomacy is fatuous. There is no possible way the United States can get its way on a Council of this kind. As we have pointed out before, some egregious problems may have been ironed out but the basic fact of there not being enough members with acceptable human rights record and, in some regions, there being none at all, remains.

In any case, one needs to know what it is Mr Bolton trying to achieve. Possibly, given that he could not push through the necessary reforms (he was not supported by those famous allies), he might be content with showing up the UN for the organization that it really is: corrupt, feckless and in thrall to bloody, kleptomaniac dictators.

It is, perhaps, unfortunate, that “American officials last month approved the budgeting of the council and pledged to support it” but it may not have been politic not to do so, in view of the vote that brought the new body into existence.

It is worth remembering that, although, countries will not be elected by their regions, the representation on the Council will have to be divided up according to them. Elections are on May 9 (Soviet Victory Day). We are waiting with bated breath.