Getting in a cat flap 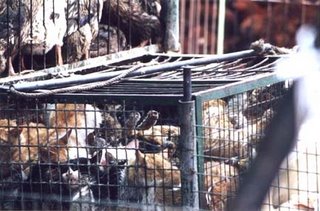 Man the barricades! "The public wants us to seal our external EU borders to this evil trade. We have to take action."

So says Conservative MEP Struan Stevenson, who wants to see a total ban on the imports of cat and dog fur, after the British-based Care for the Wild International (CWI) has found that the growth of anonymous online shopping had led to a sharp increase in the availability of fur from Asia on the internet.

This comes by way of Forbes, which quotes CWI chief executive Barbara Maas on the trade. She says her charity had found household pet skins available online, with a dog pelt costing less than £10 and, horror of horrors, domestic cat skins for £2.60. "Our research," she says, "shows how even the skins of domestic animals can be easily and cheaply bought and delivered directly to your doorstep."

Do not worry though. Struan is coming to the rescue. "After six years of campaigning resulting in unilateral bans on cat and dog fur in five EU countries and Switzerland, the majority of MEPs are determined to see an EU-wide ban put in place by the end of this year," he says.

Chinese cats and dogs will be able to sleep peacefully in their beds, courtesy of the modern and compassionate EU.

Perhaps, though, if we weren't so damn squeamish in this country the trade would not have arisen at all. Some thirty years ago, I visited a huge plant in East London, at which were collected the carcases of thousands of cats and dogs put down by vets, and by the RSPCA and PDSA.

I recall seeing thousands of cat pelts on hangers, in huge curing sheds, which were then used for trimming cheap slippers, and ladies dressing gowns, and the like – this sort of fur trimming being all the vogue then.

To my recollection, there was never much of a market for dog pelts, so I am rather surprised to see them fetching £10, or thereabouts. But, to my eternal amusement, I learnt that dog fat was much prized by cosmetics firms, for its smooth consistency and low melting point. It also contains three times as much calcium as other kinds of fat.

Under a variety of ingredient names, it was widely used in high quality face creams by a number of household name manufacturers and, to this day, I revel in the idea that generations of women, unwittingly, were smearing the remnants of Fido on their faces each morning.

Dog fat is still widely marketed in Asia and cosmetics containing it will undoubtedly find their way into this country – even if we do not produce the fat here any more.

Since our Struan doesn't seem to have latched on to this, perhaps the little doggies are not so safe after all.