Another stitch-up in the making? 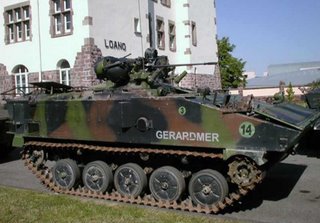 Trying to chart a way through the defence procurement maze - attempting to read the runes in this vital area of public policy – has been one of the harder tasks taken on by this Blog. Although intimately linked with foreign policy decisions, the subject also combines state secrecy and commercial confidentiality with political sleight-of-hand and a large dose of technical detail – all overlaid with industrial and commercial politics which have their own separate rules.

The central issue for this Blog, of course, is the evident Europeanisation of procurement policy, with decisions in this sphere potentially having a decisive effect on future operational options, to the extent that a British Army, furnished with equipment built to European standards will be unable to function effectively alongside United States forces or their allies which use US-procured equipment.

In this context, one of the most important programmes under way is the British Army's Future Rapid Effects System (FRES), the nature of which amounts to a revolution not only in equipment but in operational procedures, the nature of which we have likened to the transition from the horse to the tank.

This is a issue which we have covered extensively on this Blog, but is one which has been almost entirely ignored by the MSM – to its eternal shame – and has been dealt with by the government on a somewhat less than transparent basis.

As we left it, the government had issued development contracts with the Swedish firm Hägglunds for the SEP armoured vehicle platform, indicating that this could well form the basis of the British Army's new equipment – the first time in our history that we have procured mainstream armoured vehicles from European sources.

However, there have been further developments which suggest that FRES project could be widening out into a much larger European enterprise, involving not only Hagglünds but the French, state owned GIAT Industries and the German Krauss-Maffei Wegmann (KMW) armoured vehicle manufacturer.

GIAT already produces armoured vehicles for the French Army, under the AMX label, while KMW produces, amongst others, the Leopard 2 for the German Army.

Now, according to DefenseNews, these two firms are to collaborate in building a medium-size Multirole Armored Fighting Vehicle (MSMRAV), with plans for a system demonstrator to be ready by 2010, and production vehicles rolling off the lines by 2015.

This is in a market already over-subscribed by vehicles of this class, with the European Defence Agency complaining that there are already 23 types in production or planned by European manufacturers. The fact that GIAT and KMW are to collaborate, therefore, is taken as a sign that consolidation in European "land systems" enterprises is on the stocks, much as we have seen with aerospace companies.

KMW is certainly agreeing that, "The vehicle co-operation is a European answer to a European requirement," and a senior German defence official confirmed that the tie-up could be "an approach to satisfy the growing demand to harmonise requirements as envisioned by the European Defense Agency."

But what makes this particularly relevant to us is the comment by DefenseNews that the new vehicle could be a European market answer to the UK Future Rapid Effects System, a prospect affirmed by both companies which have said, in a joint statement that they are aiming to "develop a vehicle that meets current European requirements, but also goes beyond them." They add: "We are sure to create with this step a momentum that has been requested already from many institutions, such as the European Defence Agency."

The companies are using the next ten years to find technology for this "next-generation platform", preparing for requests for bids from the European Defence Agency - which fits in neatly with the British procurement timetable. Significantly, the companies also state that the project would satisfy requirements of Germany, France, Italy, Sweden and Spain, who have "signalled a need in a so-called letter of intent".

That is especially interesting as the British and Swedish governments are co-operating on the development of the SEP platform and, if the Swedish government is looking to tie up with the GIAT/KMW combine, then this could point the way towards a pan-European project in which the UK may be a participant.

Already, through BAE systems, the British government is working with GIAT Industries on the development of gun and turret systems for FRES platforms, while GIAR also produce the AMX 10P (pictured above) for the French Army, which would provides an industrial base for the production of FRES-platforms. 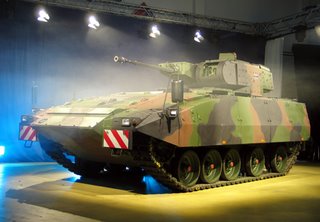 KMW, on the other hand, have been working with the arms combine Rheinmetall in producing the Puma (pictured right), advanced infantry combat vehicle for the German Army. Product "synergies", therefore, abound and British participation would make industrial, if not political, sense.

All this is, of course, speculation and there has been no word on the development from either the British government or the MSM. However, given the lack of transparency which has surrounded the whole FRES project so far, this is definitely one to watch. There could be yet another stitch-up in the making.