And why weren't they arrested? 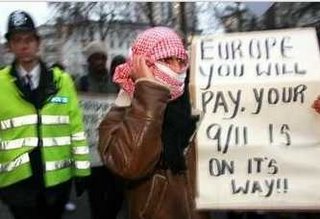 The Times updates us on that Muslim demo yesterday, with the headline, "call for 'holy war' at London demo".

Parading banners that called for the killing of newspaper editors and broadcasters from the BBC who showed cartoons of the Prophet Muhammad, says the newspaper, they marched across the capital from the mosque in Regent’s Park after Friday prayers.

There were sporadic clashes with passers-by over chants praising the four British-born suicide bombers who killed 52 passengers on three Underground trains and a London bus last July 7. 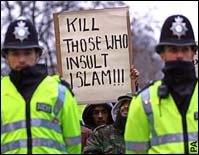 People who tried to snatch away what they regarded as offending placards were held back by police. Several members of the public tackled senior police officers guarding the protesters, demanding to know why they allowed banners that praised the "Magnificent 19" — the terrorists who hijacked the aircrafts used on September 11, 2001 — and others threatening further attacks on London.

The officers said that their role was to ensure public order and safety. Police had closed off main roads to allow the procession a clear route. Protesters screamed: "UK, you must pray — 7/7 is on its way."

And why, Mr Plod Blair, weren't they arrested? Oh, forgot… they were just exercising their right to free speech.