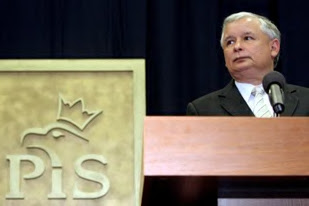 This is becoming a bit of a dog-bites-man-supermodel-takes-drugs story. Clearly not everyone in Poland is prepared to support the government indefinitely to the point of going into battle for a formula based on the square root of something or other to do with votes in the Council. My guess is that not many people know or care about those votes when bigger issues are at stake.

Poland is going through another process of members of the coalitions falling out with each other. As we reported about a month ago, problems started when Premier Kaczynski (that’s Jaroslaw) fired his Deputy and Agriculture Minister, Andrzei Lepper, the leader of the rural Self-Defence Party.

Though at first it looked like the party might remain in the coalition, a few days ago, Lepper announced that it was withdrawing from the government. At the same time, it was announced that Janusz Kaczmarek was also fired “under suspicion of having leaked classified information, obstructing an investigation into alleged bribery at the ministry of agriculture”.

According to Roman Giertych, Leader of the League of Polish Families (he of the interesting educational ideas), there has been a falling out between his party and the Kaczynskis’ Law and Justice Party and LPF Ministers are due to be sacked on Monday.

Unsurprisingly in the circumstances, the calls for an early elections have become louder. It seems that President Kaczynski (that’s Lech) has agreed with the leader of the main opposition party, Donald Tusk, that early elections will be necessary and there is news that his brother the Prime Minister has come round to that point of view, explaining that it will be on October 21 or, perhaps a week earlier or a week later but, at any rate, no later than November.

The two opposition parties, the Social-Democrats and the Civic Platform are also in favour of early elections, the latter particularly so, as its standing in the polls is higher than anyone else’s.

The Polish Parliament reconvenes on August 22 when it may well decide to dissolve itself in preparation for an autumn election.