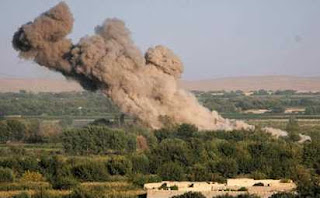 An American colleague of mine wrote to me today to remind me of the incident in December 2001 where a newly arrived air force controller in Afghanistan mistakenly signalled a high-flying B-52 bomber to drop a two-thousand-pound bomb on his own GPS coordinates. Three US special forces soldiers were killed, plus at least twenty-five Afghan fighters, with another 50 wounded.

One report which mentions this incident wryly observes: "No amount of sophisticated computer gear could prevent a stupid mistake on the part of its operators." In another report, weapons expert John Pike noted that, "if you put the wrong street address into your GPS car system, it will go straight to the wrong house," He added: "Likewise, if troops program a bomb incorrectly, you can very precisely hit the wrong target."

It is, of course, GPS-guided bombs which are used for close air support in Afghanistan, their laser-guided counterparts being less useful in the dust and smoke of an infantry battle, where it can often be impossible to get a laser lock.

Thus, the 2001 incident does raise the devastating possibility that the soldiers who were tragically killed in the recent "friendly fire" incident – or their forward air controller who relayed the GPS co-ordinates to the attacking aircraft – were authors of their own fate.

This possibility also puts a different perspective on the front page coverage of The Daily Telegraph today, as it chooses to use the deaths of the British soldiers as an opportunity to attack the MoD. The criticism starts early, under the headline, "Outcry as 'friendly fire' kills three UK soldiers," with the paper telling us that:

The Ministry of Defence has faced heavy criticism for failing to provide troops with technology that could help prevent "friendly fire" incidents after three soldiers died when an American jet dropped a bomb on them. 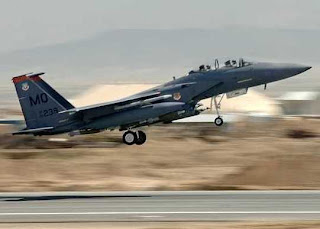 To distil the paper's argument to its very essence, it is complaining of the MoD's failure to invest in a combat identification system to protect British forces from accidental attacks by allies, in support of which it calls in aid the shadow defence team, Liam Fox and Gerald Howarth, plus a select committee which, in May, criticised the MoD for lack of progress on preventing friendly fire incidents.

We also have a comment from Geraldine McCool, a solicitor who represented Matty Hull's widow at the inquest into his death during the 2003 Iraq invasion. She makes a completely different point that, "advances in technology providing visual communication between pilots and forward controllers on the ground should ensure such incidents could not happen." This links to a reference later in the article to a previous shortage of "Rover Terminals" – equipment that allows the forward air controller to see precisely what the pilot is looking at on his targeting devices.

Thus does the paper aim to convey the impression that, once again, the MoD has failed to support "our boys" with the correct equipment.

The worrying thing is though, that while criticisms of the failure to develop combat identification systems may be merited, they are not relevant to this incident. The Telegraph, Liam Fox and Gerald Howarth are barking up the wrong tree.

For sure, such systems are an essential safeguard where, as in the Matty Hull incident, a convoy of "friendly" vehicles comes to the notice of marauding A-10s looking for targets of opportunity – not withstanding that those systems were available, had the British chosen to use them.

However, in a close air support situation, where troops are engaged with the enemy, such systems are of very little value. The pilots of attacking aircraft are not reliant on information from them. Instead, they are directly under the command of the forward air controllers who guide them to a target, the detail of which the pilots themselves cannot actually see.

It is solicitor Geraldine McCool who is actually closer to the mark in her in reference to technology "providing visual communication between pilots and forward controllers," but even then she is not entirely there. The real advance in technology is electro-optical targeting equipment which allows the pilot (or his weapons systems operator), via high resolution video cameras and infra-red sensors, to see the designated target on a screen in the cockpit. The crew can thus (in theory) make a decision based on visual identification of the target as to whether to release a weapon.

The technology also allows the crew to send that same information to a ground station, the so-called "Rover Terminal", which allows the ground troops to see what the pilot is seeing. ("Rover" is an acronym for Remotely Operated Video Enhanced Receiver.) 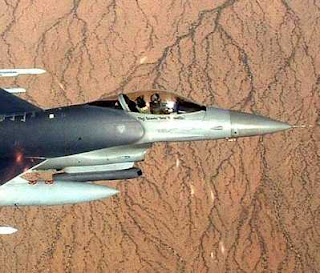 Currently, electro-optical targeting equipment is used, with a system known as the Sniper targeting pod fitted to F-15E Strike Eagles (which made the strike of the British position) and, more recently, to British Harriers (shown fitted to an F-16). Its performance is in many ways impressive, so much so that Telegraph defence correspondent Thomas Harding makes great play of it in a separate article in which he describes witnessing an F-15 strike when he was in Afghanistan.

Since the F-15E is fitted with the highly advanced Sniper targeting pod, Harding believes, "it should be very difficult to make a mistake." Then, alluding to that equipment, he speculates as to the possible causes of failure and states that, "If it was American kit, then relations that are currently being strained by Iraq can only come under further stress."

Here is where the "toy" issue now becomes overtly political (which it was all along). Barring a mistake made on the ground, a simple equipment failure could have important political repercussions. The linkage, which we have sought to make in so many of our posts, is absolute.

However, a review of the technical specifications (this and links above) of the Sniper pod – and related issues – suggests that Harding's faith might be misplaced. The equipment itself is described as a long range targeting pod, enabling aircrew flying at high altitude to see targets at some distance – 15 to 20 miles - in extraordinary detail.

In those circumstances, the fact that the pod is fixed, pointing in the direction of travel with a field of vision of only four degrees, is hardly a handicap. But now imagine an F-15E at (relatively) low level, in a hostile, high-threat environment, approaching a target. It will not take a straight approach from high level, descending gently to its release point. Rather, it will take evasive action, an indirect line, turning in at only the last possible moment to line up on its target before releasing the weapon. At the speed they are flying, the target will be visible via the targeting equipment for seconds – not long enough for a positive ID, even to troops viewing the pictures on a Rover Terminal. In fact, therefore, the F-15 crew are entirely reliant on the GPS co-ordinates given to them by the FAC. 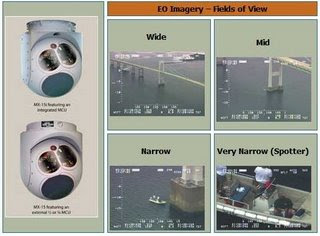 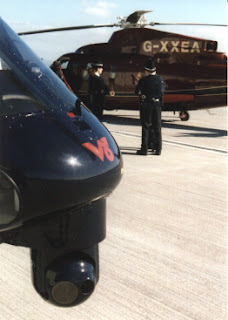 At 5,000ft, an operator can read the headlines of a newspaper on the ground and, with a 360 degree field of vision (180 degrees in the vertical plane - shown here mounted on a police helicopter) the crew of an aircraft so fitted can orbit above a target, identify it at leisure and then, with the equipment "locked on" can dive into an attack, with continuous observation of the target all the way to the release point and beyond. If the pictures are also beamed continuously to the FAC, there is every opportunity for positive identification and plenty of scope for ordering an "abort" if there is any doubt.

Needless to say, this equipment is far cheaper than the Sniper pod – its one disadvantage is that it cannot be fitted to fast jets and, as far as the single-seaters like the Eurofighter go, it would not be suitable anyway as it needs a separate, full-time operator.

Thus, having gone round the houses, with a robust discussion on our forum, we are back to our original thesis: fast jets are not suitable for close air support.

Here we get some support from The Telegraph in an article from Major Bob Thomson, who served in The Parachute Regiment until 2003 and was trained as a forward air controller. He writes:

Approaching the target, probably at low level, means the pilot has a high workload, not only in terms of aircraft management but also in relating to the ground situation. Under severe physical pressure the pilot must ensure he survives to the target area, acquires the target with his weapon control system and then engages it accurately. 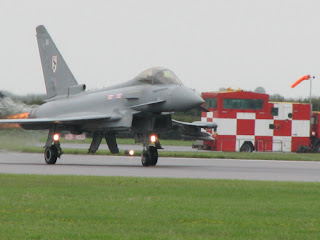 With the current equipment, this simply cannot be done, consistently and safely. As long as fast jets continue to be used, fatal mistakes will continue to happen. In close air support, we must have equipment and systems which restore executive control to aircraft crews, allowing them to make the final decisions as to whether to release weapons on the basis of accurate target identification.

To conclude, though, we come to The Telegraph leader. This newspaper, it says, has commented before on the way in which the MoD budget is often spent in the interests of our defence contractors rather than our Servicemen. We don't intend to rehearse those arguments again today, it adds. Neither do we.

But it is interesting how on the front page of the paper, shadow defence minister Gerald Howarth's solution to the problem is to give millions more to his favoured defence contractors.

Anyone can throw money at a problem but, as we have argued, that is not the answer here. We actually need less money, better spent. And, since the US is providing the bulk of our close air support, that would seem to apply to the Americans as well. Above all else, we have to break the cycle of spending more and more on increasingly expensive technology, only then to spend even more when it does not work as it should.