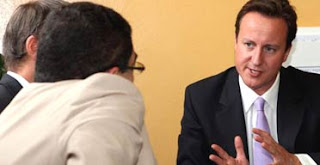 Without doubt, the domestic story of the day is David Cameron's initiative on hospital closures or, to be more specific, how he got it wrong.

To the dismay of Tory Diary, instead of taking the initiative, Cameron was on the back foot all yesterday, defending – according to Reuters - his claim that 29 hospitals face closure or cutbacks after the government accused him of "scaremongering" and getting his facts wrong.

Even the Tory-supporting Telegraph has made this its story, reporting that Cameron, "has been pitched into a bitter row with Labour over his claim that ministers plan to downgrade dozens of local NHS hospitals across England," also noting that Labour were revelling in the claim that the Tories "had not done their homework".

As you might expect, The Guardian was thoroughly enjoying itself, leading its story with the legend that, "David Cameron's leadership came under renewed pressure today as his campaign against hospital closures descended into farce," retailing with some delight that, "A day of spectacular own goals began when a Tory MP was forced to apologise for one blunder."

All this we note, however, not to score points against the Boy – plenty of others are doing that – but to sound a cautionary note about our own concern, the EU referendum campaign.

What we are seeing with the Boy is the classic political ploy, one which is of special value when your own case it weak. Instead of dealing with the substantive points, you trawl your opposition's statements for errors, focus on those and try to make that the story. In this case, the ploy has had some considerable success, and it was used widely against us in the Qanagate affair.

So it is and will be with our campaign. Already we have seen something of this, with the FCO trawling Eurosceptic literature and statements to produce its 10 Myths on the EU constitution treaty.

In general, Europhiles are past masters at this technique and we have seen it employed many times. You will see it put to use with the Booker column where, the week following a contentious (and damaging) story, you will often see one or more letters of a genre we have come to call, "Booker is wrong". Invariably, the correspondents will never address the issues, but pick on some error – real or imagined. The pitch is that, if this is wrong, the rest of the material cannot be trusted.

When errors are made, as they always will be, the trick is to be your own worst critic – to look for them, to admit to them, and then to correct them, pre-empting your enemies and disarming them with your candour. By contrast, to ignore them, to repeat them, to stick to them in the face of evidence of error or (worst of all) to attempt to cover them up, is political suicide. For sure, the hardest words in politics – as in life – are "I was wrong", but they are also a key part of a successful campaigner's armoury.

That is, in fact, why we are so critical of our own side and why we have started our own mythbuster series, which we will continue, exposing the weaknesses in our own arguments as well as those of our enemies.

As to the Boy's current difficulties, for once it looks as though he has done us a favour. In getting it so spectacularly wrong, he has shown us all how important it is to get it right.