What to make of this? 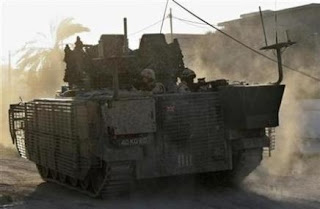 Something I've been watching since yesterday, in the hope of clarification, is the situation in the Provincial Joint Co-ordination Centre (PJCC) in Basra, which British Forces evacuated on Saturday evening.

Not exactly a base, this is a centre manned by Iraqi police, at which the Army has maintained a contingent of 50-60 troops. Neither has the presence been entirely without trauma. It was here in June that Major Paul Harding was killed as a result of an "indirect fire attack".

Anyhow, according to the MoD, the forces have been "moved" from the PJCC "in the framework of the plan for the handover of the Basra Palace to Iraqi control." And, according to The Independent the "retreat" descended into chaos when, as soon as the British left, Shia militia occupied the centre.

This paper's report, apparently based on AP copy – also retailed by IHT - has it that the remaining Iraqi police left when the Shia fighters arrived and began emptying the facility. "According to witnesses," we are told, "they made off with generators, computers, furniture and even cars, saying it was war booty - and were still in the centre yesterday evening."

With the centre previously having come under attack by the militias, the withdrawal is being seen as yet another victory for Moqtada al-Sadr, who has been claiming credit for driving British out of Basra. Certainly, The Independent is quick to claim that the militia occupation, "further undermines Britain's hopes of a smooth transfer and gives the impression of a rout."

However, while The Scotsman is also reporting a militia take-over, the MoD is denying this claim. And, in this, it seems to be supported by Reuters which is stating that Iraqi police thwarted the attempt at a take-over. 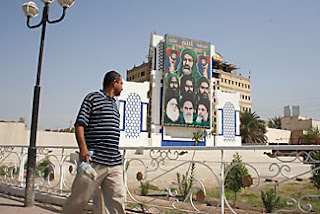 The agency cites Basra police spokesman Lieutenant-Colonel Abdul-Kareem al-Zaidi, who says that militiamen had tried to invade the centre, "possibly to ransack it" but that the situation was resolved peacefully after a delegation from the militia held talks with officials.

We also get a spokesman for Moqtada al-Sadr saying that a group of Mehdi Army militiamen loyal to Sadr had gathered in front of the PJCC and chanted victory slogans before withdrawing peacefully.

Now, from a the BBC website we read of "confused reports" about who now controls the police headquarters. British spokesman Major Michael Shearer claims that officers from the Multi-National Force spoke to the local Iraqi Army commander who "assured us that the PJCC is under his control and being efficiently run by the Iraqi Army." He is also said to have stated that, "all the equipment remains within the PJCC".

An MoD spokesman also says there was a green Shia flag flying on the building, but not the black flag associated with the Mahdi Army.

So, as to what precisely is going on, we do not really know. But what comes over is that neither does the British Army, which is reliant on reports from third parties which may or may not be true. Whatever else, that does seem to indicate that there is yet another residual area of Basra over which it has lost control.

Meanwhile, with the retreat withdrawal from Basra Palace imminent, the Christian Science Monitor is claiming that British commanders have struck a deal with leaders of Moqtada al-Sadr's 17,000-strong Mahdi Army to ensure their safe departure. It appears that this included the release of more than two dozen Mahdi Army prisoners.

One of those released is Sajad Abu Aya, the head of the Mahdi Army in Basra province, who, when he was captured in July last year in a major raid, "was strongly suspected of involvement in planning and directing terrorist attacks on civilians in Basra, executions, and attacks on coalition forces." His arrest last year was hailed as a coup by British forces during their offensive against militias in the city as part of Operation Sinbad.

As Sajad revels in his freedom and the British prepare to depart to their last redoubt at Basra Air Station, it is increasingly difficult to accept this final stage of our occupation of Basra as anything other than a continuation of the retreat started in al Amarah last year.