Frattini on the warpath 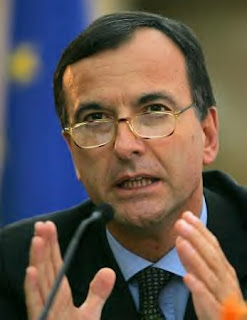 As reported by the Iranian Islamic Republic News Agency (there’s glory for you, as Humpty Dumpty said), the Commissar for Justice, Freedom and Security and also Vice President of the European Commission, Franco Frattini, has given an interview [link in German] to the Frankfurter Allgemeine Zeitung in which he called for the banning of the neo-Nazi NPD.

Presumably, this particular bit of politicking has taken place as a result of the race attacks in Eastern Germany. The locality raises interesting problems – why is it that there have been far more problems with neo-Nazis and other unpleasantly violent and racist groups in the former GDR than in the former FRG?

Commissar Frattini declines to deal with the issue or with one or two other problems with organizations that call for violence and murder but points to the fact that while Germany has the biggest problems with right-wing groups, other west European countries suffer from them as well, notably Germany, France, Belgium, Denmark and Italy.

Another problem Commissar Frattini might like to ponder over is why this should be happening. Was the EEC/EC/EU not the organization that was going to do away with all political nastiness, particularly racism and xenophobia? Is there not an organization set up by a Regulation specifically to deal with the subject? Are there no directives about it? So why is the problem getting worse, if, indeed, it is getting worse?

Of course, another question one would like to know the answer to (that’s all we do, ask questions) is why the Islamic Republic of Iran be all that bothered by what the NPD says, as long as it continues the old Nazi line that Jews must be exterminated? After all, that is something the government of the Islamic Republic happily endorses. It is possible that the NPD has moved on from that point of view and the INRA might consider it to be a revisionist party.

Thanks to one of our readers we know of at least one reaction to the interview in the blogosphere. The Danish-Swedish blog Snaphanen, which looks quite interesting but I can understand very little of it, picked up on the story under the title “Hvem præcis har Franco Frattini i tankerne?”. (I think I can understand that.)

In it Steen wrote, as translated by our reader:

In Denmark the anti-EU, anti-immigration party Framskridspartiet has some 12 - 14% of the vote and is part of the parliamentary support of the government. However, there are only miniscule groups of BNP-like racist parties in Denmark. Just as in Flanders the Vlaams Belang cannot be considered a racist party, although their enemies still call them that.The question that we really need to ask ourselves is how long before anti-EU parties are outlawed?

A long time would be my guess, if for no other reason than because the anti-EU parties and organizations are so unsuccessful.

In any case, Frattini is spitting in the wind, if I may use such a vulgar expression. The last time there was an attempt to outlaw the NPD, the case was thrown out by the German Constitutional Court in Karlsruhe, refusing to accept evidence from paid informers and agents provocateurs.