A deliberate and calculated deceit 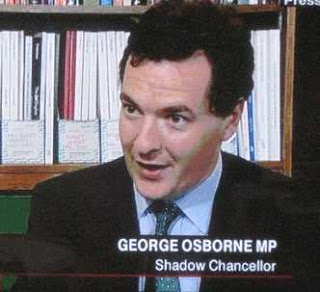 The media have been full of the report produced by John Redwood's competitiveness commission. Others have had their say on this but, of particular interest, was the BBC Radio 4 Today programme interview of shadow chancellor George Osborne.

During a long discussion, he was challenged by Sarah Montague on Redwood's deregulation proposals – cutting "red tape" as she put it - who specifically referred to the claim by UKP that little could be done because most regulation came from Brussels.

Said Montague, "The trouble is that, of course, half, as the UKIP – the United Kingdom Independence Party’s pointed out, that over half the regulations applying to British businesses are from the EU. That the Conservative Party would have huge legal problems if you started trying to untangle that."

Without so much as a blush, Osborne immediately responded,

Well, you've got to remember that what actually happens is that the European Union proposes a directive, proposes a way of regulating something, and then leaves it to the national governments to decide how that is actually implemented in the member state. So that means the British civil service decides how the European directive is implemented. And I think, on far too many occasions they have over-interpreted European regulations, they have made them overly burdensome and, you know, the first place you could start with European regulation is by making sure that European regulation is not imposed in this country more harshly than it is in other European member states.

It says something (even if we'd rather not be precise) about Montague that she did not respond to the failure to address her question, and moved on to other matters. Thus did Osborne completely evade the issue of what to do with the massive burden of regulation that is not "over-interpreted" and is simply "onerous".

Even then, although "gold plating" – as it is often called – was a problem in the 90s, it is less so now. Some of that is because of a spirited campaign in those same 90s, led by Christopher Booker – whose work merited not a few mentions in the House of Parliament. But, perhaps, as important a reason has been the changing nature of EU regulations.

Back when we joined the (then) EEC, the primary legislative instrument was the Directive. These were often very loosely phrased and, indeed, they left national governments a great deal of flexibility as to how they implemented them. And, as we know, all too often our government (under the supervision of ministers, I might add), did over-egg (or "gold plate") the resultant British legislation.

Currently though, by far the bulk of EU law comes in the form of EU (or EC) Regulations which have what is known as direct effect. They become law the moment they are "done at Brussels" and do not require transposition into British law. Furthermore, they are usually very precise, leaving little room for interpretation.

As to the Directive, by far the majority of these coming through the system are what as known as "framework directives", rather like British enabling Acts, giving power for the Council or the Commission to make EU regulations.

Now, Osborne must have known this. For some months now, the shadow Cabinet has been under instructions to trawl for examples of "gold plating" and junior shadow ministers have been put to work. But, despite extensive trawling, the pickings have been very thin indeed.

What Osborne was doing on the Today programme, therefore, was indulging in diversionary tactics. He was engaging in a deliberate and calculated deceit, all because, like his colleague John Redwood, he has no intention whatsoever of engaging seriously with the European Union to cut down the burden of regulation.

And, as long as he is up against the likes of Sarah Montague, he thinks he can get way with it. But, we have news for him. The blogs are watching…