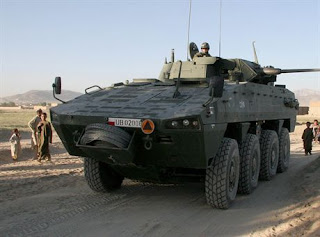 Ann Marlow, in the Wall Street Journal tells us not to believe the naysayers. Afghanistan, she writes, is doing as well as anyone has a right to expect. She is probably right.

However, as we keep pointing out, ad nauseam, the battles for these far flung places are not won (and, especially, lost) on the ground. The real battleground is the hearts and minds of voters in the countries who provide the forces (and the money) which are fighting to bring stability.

And again, as we never fail to point out, the currency of this war is the dead soldiers. Western populations are remarkably sensitive to even a small number of casualties and as the death toll mounts – with yet another British soldier reported killed in Afghanistan, resolve weakens.

That much is evident from the YouGov poll in the Sunday Times, which has only six percent of respondents believing that our Army is winning the war in Afghanistan.

Wrong though the perception might be, not a little of this arises from the spectacular ability of the MoD to score own goals, with its supply of dangerous and inadequate equipment.

Compare and contrast with the news yet again of an ambush in Afghanistan, when a Canadian RG-31 was hit by a roadside bomb and the convoy in which it was travelling subject to a "baptism of fire", attacked by rocket-propelled grenades. And, once again, the crew of five escaped, this time with light injuries, allowing Brig. Gen. Guy Laroche to remark, of the wounded soldiers, "They're fine, their morale is good".

A similar story comes from the crew of a Polish Rosmak (Wolverine) armoured personnel carrier (pictured), which hit a land mine in eastern Afghanistan, 25 miles from the military base in Sharan in the Paktika province. No soldiers were injured although the blast severely damaged the vehicle.

Yet, while Polish and Canadian forces can parade their good fortune, the MoD response is to close down the debate, prohibiting us from discussing the weakness of their equipment, while also imposing the most draconian of gags on serving personnel.

Thus, while the State gags the very people who could help bring sanity, and restore effectiveness to our own forces, redressing the inherent incompetence in the bureaucratic structures in the MoD, the gainsayers run rampant with the only information that the MoD freely offers – the deaths of British soldiers. Small wonder we are losing the propaganda war.