Don't you just love this! 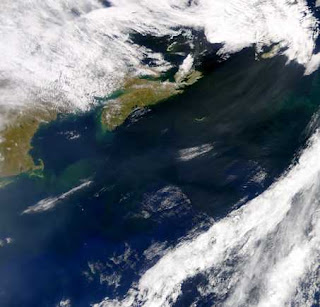 In breathless style, we were then told that, "Since the late 1960s, much of the North Atlantic Ocean has become less salty, in part due to increases in fresh water runoff induced by global warming ... Now for the first time researchers have quantified this fresh water influx, allowing them to predict the long-term effects on a 'conveyor belt' of ocean currents."

The report went on: "Climate changes in the Northern Hemisphere have melted glaciers and brought more rain, dumping more fresh water into the oceans, according to the analysis." And, of course, we were told, "One of the expected high-profile consequences is a rising sea that will swamp coastal communities…".

This time, we are told: a "new study of records spanning over 50 years" shows that "the surface waters of the North Atlantic are getting saltier." Not content with that, this report tells us: "...this might actually be good news for the effects of climate change on global ocean currents in the short-term."

Reading on, we learn, "this is because saltier waters in the upper levels of the North Atlantic ocean may mean that the global ocean conveyor belt – the vital piece of planetary plumbing which some scientists fear may slow down because of global warming – will remain stable."

Says Tim Boyer of the US National Oceanographic Data Center, "The seawater is probably becoming saltier due to global warming … We know that upper ocean is warming in the North Atlantic, so it stands to reason that there should be more evaporation, making waters more salty," he says.

You just have to laugh.