A most peculiar gesture 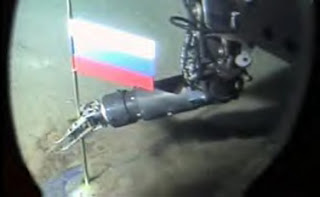 In one of the episodes of his series the immortal Tony Hancock plays a British officer who is dropped behind the lines to carry out various nefarious activities during WWII. The reason is explained to him very clearly: "We need a futile gesture at this stage of the war. It will raise the whole tone of the war."

Those were my thoughts as I read incredulously of the Russians planting a titanium flag under the North Pole and proclaiming that the Arctic was always Russian anyway. This is a very doubtful proposition even if there is evidence of the same continental shelf running from Siberia to the Arctic.

There are, as it happens, international agreements about the two Poles and it seems unlikely that the Russians will get away with it, despite all the blustering.

"The Arctic always was Russian, and it will remain Russian," expedition leader Artur Chilingarov told reporters after he landed at Moscow's Vnukovo airport, where wellwishers brandished bottles of champagne and Russian flags.

"We are happy that we placed a Russian flag on the ocean bed, where not a single person has ever been, and I don't give a damn what some foreign individuals think about that," he said.

You can see at a glance that the whole tone of the new cold war is about to be raised.

Canada reacted swiftly by dismissing the claim, warning all concerned that it intends to protect its territory and pointing out that this was not the fifteenth century when explorers simply arrived at a place and planted a flag. The Russians, of course, disagree with that.

Prime Minister Stephen Harper is touring the area and has announced plans for a military base.

The American spokesperson made some comment about it not really mattering whether they plant a titanium flag or a bed sheet. The Danes have advanced their own claim to the Arctic.

So, if the Russians wanted to set everyone by their ears, they have been successful. But what will they get out of it themselves, apart from the boast that they got there (possibly) first? There are, of course, great resources in the Arctic but there are also great resources in eastern Siberia and the difficulties of extracting them seem almost insuperable.

Meanwhile, there has been a certain hiccup in the reporting, as one of our Finnish readers wrote to us yesterday. It seems that the pictures, originated by Reuters and sent to all the media outlets were not precisely accurate.

A 13 year old schoolboy wrote to his local newspaper pointing out, "the footage actually showed two Finnish-made Mir submersibles that were employed on location filming at the scene of the wreck of the RMS Titanic ship in the north Atlantic some 10 years ago". He noticed it because the footage had been used in the 1997 blockbuster film.

Reuters had to apologize and re-label their film adding all the file names. The trouble is that the new labels show that the film consists entirely of file shots of previous Russian expeditions to the Arctic plus the ill-fated Titanic sequence.

Which does raise a question or two about the whole episode.
Posted by Helen at 00:02