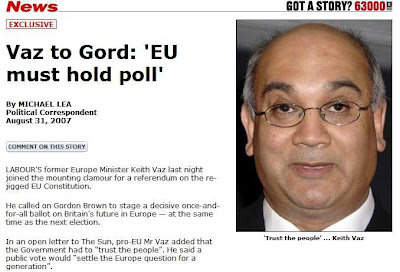 Arguably one of the most corrupt MPs of a pretty corrupt bunch, hero of the hour is now Mr Keith Vaz, former Europe Minister, lauded in The Sun for calling on Brown to hold a referendum on the EU constitutional reform treaty.

Even the BBC has been forced to recognise the incongruity of such a development and The Daily Telegraph, once the strongest critic of the man, is giving him a run this morning, quoting him liberally. "As a former Minister for Europe," he is cited as saying, "I believe the time has come for the Government to hold a referendum and decide once and for all Britain's place is at the heart of Europe".

The Independent puts his statement in a wider focus, telling us that Brown is being urged to call a snap election this autumn, "in an attempt to defuse a row over Europe which threatens to divide Labour." Coming from the left wing press, this is the first real sign that unease in the Labour ranks is not simply a media storm cooked up by the right-wing press.

Says, The Independent, some of Brown's advisers are pressing the Prime Minister to seek his own mandate from the voters in October to head off demands by MPs in all parties for a referendum. One Labour source is cited as saying, "Europe is now a factor in the election decision."

We are told that supporters of an immediate poll argue that it would prevent the run-up to an election next May being overshadowed by a messy and divisive parliamentary battle to secure the passage of a Bill to implement the treaty. Apparently the putative rebellion is reviving memories of the bitter split among Tory MPs over Europe which destabilised John Major's government before the 1997 election.

Perhaps then it is more than a straw in the wind that The Telegraph is reporting that the arch Europhile foreign secretary David Miliband has refused to rule out a referendum.

This came in an interview with the ePolitix.com website, when Miliband reaffirmed the government's view that the revised treaty was not the same as the defunct EU constitution rejected by Dutch and French voters in 2005. Then challenged to say there would definitely not be a referendum, he replied: "I'm repeating exactly what the Prime Minister said, which is that the constitution has been abandoned, that we're in a new situation and that parliamentary scrutiny is the way forward."

But, asked to say that there was no possibility of an eventual referendum, Mr Miliband repeatedly ducked the question. Instead, he suggested Labour was planning a co-ordinated campaign to persuade MPs and the public that the treaty was good for Britain.

Cue now The Daily Mail which offers as its lead editorial a strong piece, entitled, "Heading for another European stitch-up". Clearly borrowing from Booker's piece yesterday (which Open Europe somehow forgot to mention in its press round-up), it launches a sharp attack on Brown, a man who, the paper admits, it has "always felt considerable admiration".

"Amid slithery Blairite cynicism, he was notable for his moral seriousness," says the paper, "So what on earth possesses him to risk that hard-earned reputation by breaking Labour's manifesto pledge and refusing a referendum on whether Britain should hand even more power to Brussels?"

We are all waiting for an answer.