Too corrupt for the EU? 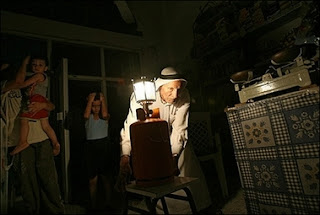 What does it take for the European Union to stop wasting taxpayers’ money? Well, it seems the possibility of Hamas illegitimately taxing electricity supplies to support itself and, no doubt, its militias, while the EU paid for the fuel needed to keep the main power plant in Gaza going might just have done the trick.

Under the three-state solution – Israel, Gaza under Hamas and the West Bank under Fatah, the last two known irreverently as Hamastan and Fatahland – Hamas was banned by Mahmoud Abbas from collecting taxes. It is not clear how that ban was to be enforced except by various so-called humanitarian aid being withheld if taxes were to be collected.

Hamas has, naturally enough denied that it was planning anything so wicked as to tax the electricity supply:

A senior official in the Hamas administration in Gaza said the concerns were unfounded. "There is no new tax and we have no plans to introduce any new tax on electricity bills," the official said.

Kanaan Abaid, deputy chairman of the Palestinian Energy Authority, said none of the revenues generated at the plant reached Hamas or its administration in Gaza.

Then again, another opinion was heard as well:

Palestinian Information Minister Riyad al-Malki said electricity from the power plant was already a source of revenue for Hamas, but he did not explain how.

One explanation might be that Hamas has been replacing directors with its own people:

Hamas has been going door to door in Gaza in recent weeks, ordering residents to pay long-overdue electricity bills. While Hamas denies it controls the electricity company, Abbas' Fatah insists it does, citing the arrest last month of the Gaza electric company's executive director.

So last Friday the EU cut off payments for fuel and told the Israeli electricity company Dor Allon that it may as well suspend the supply of electricity in the circumstances. To everybody’s surprise, the power plant in Gaza did not have fuel for two days, as it had been assumed. One rather wonders why not. On Sunday the power station ceased to function.

Gazans initially were unfazed by the outages, because power reserves are always so thin that consumers are used to living without electricity for about five hours a day. But as the shortages dragged on for a third straight day, nerves began to wear thin. The din of private generators outside every shop on Gaza City's main commercial street filled the air as Naim Hamdan, a civil engineer, recounted how he sent home his 25 employees to conserve fuel. Grocery store owner Fawaz Khalil said NIS 3,000 worth of cheese and milk spoiled because his generator wasn't powerful enough to keep his refrigerator cold.

One good thing about this story: we can see that life in Gaza, while not exactly brilliant, is not actually quite as bad as we sometimes hear. So the money that we spend on that place isn’t all completely wasted. Then again, the more aid goes to Gaza the less likely they are to start running their own economy. But nobody, least of all the UN or the EU, really expects that.

The latest news is that the EU will resume payment for the fuel on Wednesday. Whether that means that it believes the necessary assurances from Hamas that no money will be diverted into the party’s coffers or whether it has simply been unnerved by the immediate collapse in Gaza, is unclear.