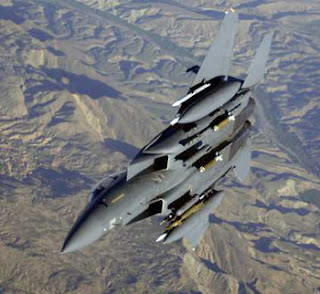 At this point, details are sketchy, but we do know that three soldiers from 1st Battalion The Royal Anglian Regiment were killed, and two seriously injured – one very seriously – after being hit by a bomb delivered by a US Air Force F-15 (pictured above) acting in close support.

All of the soldiers, we are told by the MoD, were taking part in a fighting patrol to disrupt Taliban activity and reassure the local population north west of Kajaki, Helmand Province, when the incident occurred at approximately 6.30pm local time.

Their patrol was attacked by Taliban insurgents and during the intense engagement that ensued, close air support was called in from two US F15 aircraft to repel the enemy. One bomb was dropped and it is believed the explosion killed the three soldiers.

To the predictable claim that, once again, British soldiers are being slaughtered by "gung-ho" or "trigger happy" Americans, the response is straightforward.

Firstly, although there is an RAF presence in Afghanistan, by far the overwhelming preponderance of firepower is provided by the USAF and US Navy. Therefore, on the basis that they supply most of the support, statistically, it is more likely that their aircraft will be most frequently involved in "friendly fire" incidents.

Secondly, whichever way you look at it, close air support, as it is called, (often abbreviated to CAS) is inherently dangerous.

As in this case, you are asking aircraft to intervene at short notice in a free-flowing firefight, where troop positions are not always clearly defined and where the ground situation can be highly fluid. Under such circumstances, tragic mistakes are inevitable and the rationale is that, on balance, air power saves far more friendly lives than it destroys.

That said, there are underlying issues here, which you can be assured the media will not address. One of those, gleaned from the many battle reports to come out of the theatre and from discussions with people who have actually been out there, is that we are overly reliant on air power.

In part, perversely, this reflects a strategy to avoid casualties. Often, in set-piece attacks, there is a choice between a classic infantry assault or standing back and calling in air power to neutralise a target before the troops move in. Since coalition forces – rightly – are casualty averse, the air power is usually the preferred option, when it is available.

But another reason why air power is so often used is that UK forces lack suitable armour to carry out their duties. And we are not referring here to protected vehicles, but to basic military tools such as Warrior MICVs and main battle tanks. 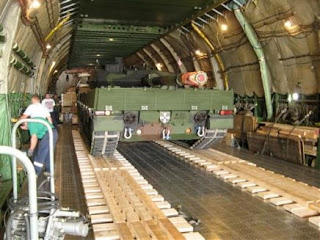 While the Canadians have both their LAVs (albeit that these have certain vulnerabilities) and Leopard tanks, British forces are reliant mainly on light Viking APCs, Mastiffs and a few Scorpion light tanks. These are not up to the job, which means that air power is called in to make up for the deficiencies in ground force equipment.

However, not only is air power being over-used – the wrong sort of aircraft are being employed. Cue now all sorts of interjections, on how sophisticated targeting equipment has become, and how precise ordnance delivery is. I am unimpressed.

I have actually flown jets at low level, albeit trainers. Everything moves too fast, the workload is too high and everything happens too quickly for mistakes to be eliminated. You have your work cut out just flying the aircraft and keeping yourself alive. It takes almost superhuman skill to fight the machine as well.

Here, we have the fast jet syndrome. The F-15 was originally designed as an air superiority fighter and is in its second career as a ground support aircraft. For CAS, it is too damn fast to do the job safely. The reason it is used, of course, is the same reason we are using Harriers and will, probably, use Eurofighters – because we have them. In this, the US and British militaries are as bad as each other. 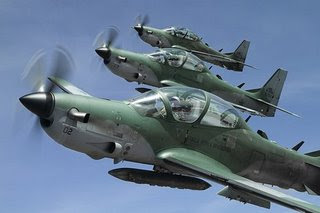 We have, of course, rehearsed this issue before, arguing for the introduction in theatre of low speed turboprop aircraft such as the Super Tucano, which can deliver smaller munitions, more precisely, avoiding the collateral damage and civilian casualties that have become a distressing feature of this campaign. Even this should not be discounted.

Neither is it just a matter of speed. The Tucano-type aircraft have modern targeting equipment but they also have two crew, who can share the workload that can defeat a fast jet pilot. As importantly, the aircaft have a long endurance – up to six hours on station – so that they can orbit above an area of operation, allowing the pilots to become fully integrated into the battle plot, acquiring situational awareness far superior to that of a "visiting fireman" in a fast jet.

That the aircraft are constantly overhead will almost certainly act as a deterrent to attack – especially as the pilots can provide extra, highly capable eyes, and warn of potential ambushes. But there is another factor. Because the aircraft can remain on station for long periods, often – despite their slower speed – they can intervene faster, whereas it can take twenty minutes or longer to wait for fast jets to arrive. Delivered earlier, the lighter ordnance of the turbo-jet can prevail before the tactical situation deteriorates.

There are, of course, alternatives. One such is organic helicopter support – light gunships such as the Kiowa or even the MD500 series, attached to every patrol. However, the British Army has never been able to get its brain round this idea, despite the obvious and proven tactical advantages. 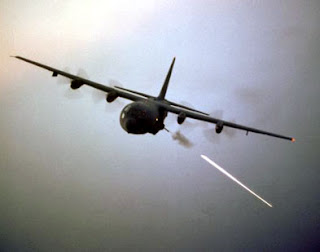 Another alternative is the AC-130 gunship. Based on the Hercules transport aircraft, it too can remain on station for extended periods and can deliver a variety of ordnance with incredible precision and devastating effect, using its highly sophisticated targeting equipment.

These aircraft, however, are expensive - almost as costly as a Eurofighter – but between the flashy fast-jets and a lumbering AC-130, I know which I would prefer to have on station.

Unfortunately, that is not the way air forces think. CAS is always (and always has been) a poor relation, with the fly-boys obsessed with their shiny toys in which they can do their "steely eyed killer" routines as they roar around the skies.

Once again, therefore, we are in familiar territory – the never-ending friction between obtaining the "toys" which keep the chaps happy and acquiring the equipment that we need to fight the wars in which we are actually engaged.

Unfortunately, all too often, the "boys and their toys" mentality prevails. For all their skill and outward gravitas, show your average military man a shiny new toy and his brains will dribble out of his backside as he goos and gurgles in delight at the prospect of playing with it.