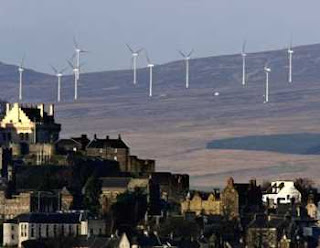 "Revealed: cover-up plan on energy target," blared the front page of the Guardian today. But it should not come as a surprise that this newspaper has got hold of the wrong end of the stick.

It had obtained a leaked document from the Department for Business, Enterprise and Regulatory Reform (formerly the DTI), on Britain's renewable energy targets. On the basis of that 19-page document, it was reporting that government officials had "secretly briefed" ministers that Britain has no hope of getting remotely near the new EU renewable energy target that Tony Blair signed up to in the spring

Accordingly, these same officials – in the words of the Guardian were suggesting that the government finds "ways of wriggling out of it" – thereby giving the lie to government's claims "to be leading the world on climate change".

But what the document actually does, in a clinical, analytical fashion, is expose the fantasy world in which Blair and his fellow "EU leaders" inhabited at the March European Council meeting. Divorced from any notion of reality in their little bubble, they had committed their respective countries to the wildly unrealistic target of producing by 2020, a mad 20 percent of the collective demand for energy in the European Union from renewable sources.

Now, this "internal briefing paper" tells ministers that the best the UK could hope for is nine percent, which includes the two percent currently provided, and even that would be "challenging". Furthermore, this will cost the UK economy an extra £4 billion a year in energy costs, albeit a fraction of the cost of the unattainable 20 percent target which is estimated to cost £22 billion per annum.

What the paper puts into sharp focus, however, is that our masters in Brussels are expected to demand at least 16 percent from the UK, and energy commissioner Andis Piebalgs is due to visit in the autumn to discuss the UK's plans to achieve this target. Officials, therefore, have produced this paper all in a rush, imploring our own ministers urgently to agree a "line to take" with the commissioner, in the vain hope of fending off this ruinously expensive demand. Thus do we see eloquent testimony of the extent to which the EU agenda dominates ministers' activities.

Another thing – ignored entirely by the Guardian - is a commentary on the EU's emission trading scheme (ETS). This is the EU's flagship policy, aimed at driving down greenhouse gas emissions by imposing decreasing quotas for carbon emissions on a wide range of energy-using enterprises, forcing them to buy "carbon credits" from the market if they exceed their quotas. The theory is, of course, that as the cost of carbon increases, those enterprises will be driven to adopting carbon-reducing technologies and procedures, this cutting overall emission.

In this paper, however, there is a bombshell. Pushing for a 20 percent renewable target, the officials write, would have precisely the opposite effect, driving down the cost of carbon, to the extent that a complete collapse of ETS would be precipitated. Not for the first time, we have two policies completely at odds with each other. 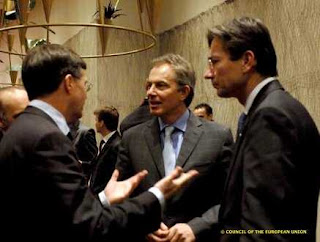 That conflict of policies was already evident with the ten percent biofuels target, which is also explored in this paper.

The officials note, with masterly understatement, "the main constraints on increasing renewable energy in fuel use are the constraint (sic) on the land available for biofuels, and on the sustainability of imported biofuels". Meeting the 10 percent target, they write, would involve a 25-fold increase on 2006 sales. "This could have significant cost implications on the economy as a whole," they add.

It is the final section, however, that sets the tone. There, the officials record "business and other stakeholder views": the ambitious nature of the target itself, they consider, "means it lacks credibility".

That, actually, is far too restrained. In the hothouse of the European Council - freed from the constraints of his own Parliamentary system - Blair and his EU "colleagues" totally lost touch with reality, vying to put the EU and the UK at the forefront of the "greener than thou" brigade.

A pained Guardian leader bemoans that "not only did Tony Blair sign up to the EU commitment in March, he claimed credit it for it." This is what he said at the time: "There is some pride in our country because this agenda very much grew out of what we tried to do in our G8 presidency and our presidency of the EU. It is tremendous to think that 18 months later we have what I think is a historic summit."

His words, the leader adds, "fit uncomfortably with a subsequent internal briefing paper prepared by officials." And indeed they do, as they always do when reality begins to intrude.