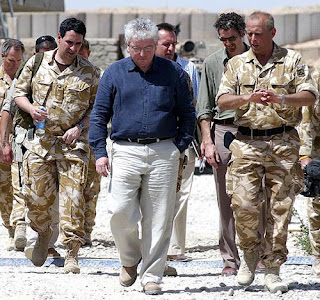 Returning from Afghanistan this week, defence secretary Des Browne declared he has "no doubt" that Iran is arming the Taliban in a bid to make it more effective against UK, Afghan and NATO forces.

"I have no doubt," he told The Guardian, "because we have uncovered evidence of weapons coming in through narco-trafficking routes, supplying weapons to the Taliban. I have reason to believe the Taliban go to Tehran for training."

His comments are one of the latest developments in an increasingly bizarre situation that has had the Bush administration considering designating the Iranian Revolutionary Guards as a terrorist organisation, while the European Council – with the active support of our own foreign office – is defying the ECJ in continuing to brand the Iranian PMOI opposition as a terrorist organisation.

The action of our own foreign office was first highlighted by Christopher Booker in his column in June, shadowed by this blog, again by this blog and then again by Booker in July, pointing out that the British action was largely at the behest of the Tehran regime.

Almost entirely ignored by the rest of the media, this situation is now coming to a head where the US, in parallel with its intent to blacklist the Revolutionary Guard, is also mooting active support of the PMOI with a view to exploiting the growing divisions and unrest inside Iran, in the hope of triggering regime change.

Effectively, this puts the EU and the United States on a collision course, with the two blocs at polar opposites. And, despite its "special relationship" with the US, the UK remains at the centre of the EU moves to emasculate the Iranian opposition - in direct conflict with Washington. Yet it is that opposition which could prove the only realistic counter to a regime that is financing and supporting insurgency operations in Iraq and Afghanistan.

Somewhere here there is, to say the very least, a glaring inconsistency in British policy, but it is one which needs urgent resolution. It cannot be right that, on the one hand, we are giving aid and comfort to the Iranian regime while, on the other, we are sending troops to Iraq and Afghanistan to be murdered by that regime's proxies.