What if they say no? 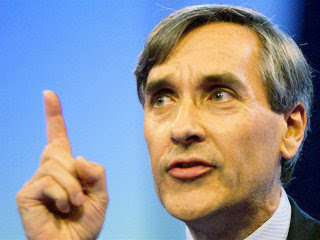 The BBC's Robin Lustig interviewed John Redwood on the Radio 4 World Tonight programme yesterday, specifically to ask him about the EU dimensions of his deregulation proposals.

Redwood readily conceded the EU involvement, telling Lustig that, "In some circumstances, we will need to discuss these matters with our European partners".

In some circumstances, though, Lustig rejoined, you will need to renegotiate the treaties, against which Redwood argued that it was in all the member states' interests to go for deregulation. "It would be wise for all member states to move together," he said.

If they don't want to do it, he continued, "we would then want our opt-out … I can't see how it would be difficult to renegotiate our opt-out". Then we got to the crunch: Mrs Thatcher had renegotiated the rebate so there was no reason why a new Conservative government would not be successful.

There we have it again – but there is a reason. As we pointed out in our earlier piece (link above), the Thatcher victory was in the circumstances where the "colleagues" desperately needed a new financial settlement and she held a veto. Unless they agreed to give her back some money, she could hold out forever.

In this case, however, the British would be the supplicants – with nothing to offer – and the "colleagues" would hold the veto, leaving Redwood high and dry if they said "no".

As we suspected, therefore, this is the same delusional thinking of old – that somehow all the new government has to do is go over to Brussels and talk sweet reason to the "colleagues" and they will fall into line. But, if they don't, you just have to "wave the handbag" and all problems will melt away.

They really haven't moved on, these people – they are still in their fantasy world with no understanding of what they are dealing with.