It woz the EU wot dun it! 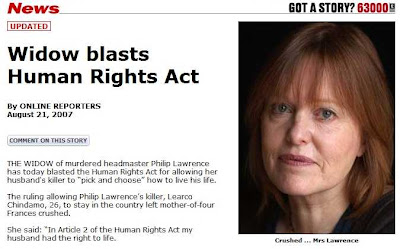 Almost without exception, the UK media got it wrong this morning in its coverage of the notorious Learco Chindamo, the man who as a youth murdered headmaster Philip Lawrence as he intervened outside his school to break up a fight.

The consensus of media opinion (the one above is from The Sun) is that this is another of those mad examples of the Human Rights Act, the reports focusing on how application of this Act has meant that Italian-born Chindamo cannot be deported on completion of his sentence for murder.

So complete is that belief that The Independent was able to extract a quote from David Davis, the shadow home secretary, saying: "It is a stark demonstration of the clumsy incompetence of this Government's human rights legislation that we are unable to send a proven killer back to his own country, especially when that country is in the EU."

The reports have also had Conservative leader David Cameron calling for the abolition of the Human Rights Act and its replacement with a British Bill of Rights. Interviewed by BBC radio in the West Midlands he accused Labour of being "blind" to the HRA's failings, declaring that: "The fact that the Human Rights Act means he cannot be deported flies in the face of common sense. It is a shining example of what is going wrong in our country. He is someone who has been found guilty of murder and should be deported back to his country... what about the rights of Mrs Lawrence or the victim?"

It has thus taken Frances Gibb, Legal Editor of The Times to set the record straight, in an online analysis which states that the Human Rights Act played only a minor secondary role in the judgement. The decision to allow Chindamo to remain in the UK was based primarily on EU law. As an Italian national who has been in Britain for about 20 years, he has – the Immigration Tribunal ruled - the higher protection afforded to all EU citizens against expulsion. 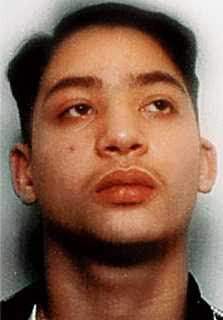 Helpfully, The Times has published the full text of the judgement - all 33 pages of it - and, from that, it is clear we are talking about our old friend Directive 2004/58/EC "on the right of citizens of the Union and their family members to move and reside freely within the territory of the Member States".

This we wrote about twice in May last year here and here, and again in May of this year, this piece specifically dealing with the deportation of EU nationals.

Mind you, if most of the media and the politicians have got it wrong, so too has Open Europe. Although quick to recognise the application of Directive 2004/58/EC, it then argues that the case, "highlights fundamental problems with the EU's attempt to harmonise justice and home affairs law." Says director Neil O'Brien, "This ruling is the thin end of a very long wedge. Harmonisation of justice and home affairs laws will throw up more and more cases in which politicians are powerless to act in cases where most of the public expect them to."

The case does, of course, have nothing to do with the harmonisation of justice and home affairs laws. The directive relies for its legal base Articles 12, 18, 40, 44 and 52 of the Treaty Establishing the European Community and relates to one of the most fundamental parts of the original Treaty of Rome, the "free movement of persons", which now "constitutes one of the fundamental freedoms of the internal market."

The interesting issue, therefore, is not the spurious point raised by Open Europe but the question of whether the Boy King, having found the judgement objectionable when he believed the Human Rights Act responsible, will show the same enthusiasm for repealing EU law, now that this is shown to be primarily responsible for the judgement.