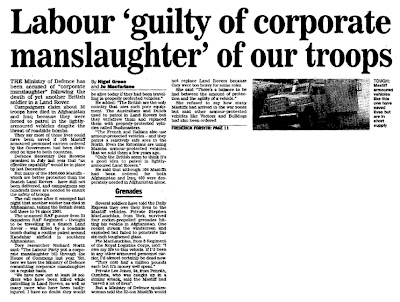 Senior Aircraftman Christopher Bridge was held in very high regard by his comrades and officers. His death is a tragic loss which is being felt by all who knew him. My thoughts and prayers are with his family, friends and comrades at this most difficult of times.

That is not good enough Mr Browne. Your thoughts should have been with these men, before they died, when they were being sent out into a hostile environment. Then they might have been properly equipped. 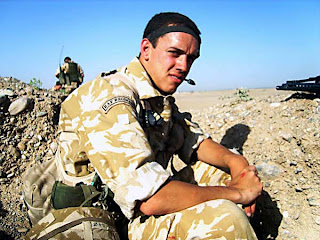 As it is, Daily Express has picked up the "Corporate Manslaughter" issue (no link, but click on the pic above, and it should be readable.) Says "Tory researcher" Richard North:

We have now lost at least 30 soldiers who have been killed while patrolling in Land Rovers, as well as many more who have been badly injured. I have no doubt they would be alive today if they had been travelling in properly protected vehicles.

If Mr Browne cares to dispute that, then perhaps he, Lord Drayson and General Dannatt might like to visit Kandahar airbase. They could then take out a WIMIK Land Rover one dark night and tour the perimeter for a few hours, or until their vehicle hits a mine.

And, if they are not prepared to do that, why should they expect our soldiers to do it?