It all went horribly wrong 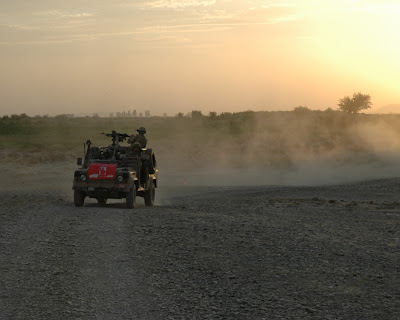 I do not shed tears easily, but all of a sudden it gets too close.

The news today, from the MoD website is of a British Serviceman from 51 Squadron RAF Regiment killed, along with a civilian interpreter in Kandahar Province, Afghanistan. Two other Servicemen received minor injuries.

As always, the initial announcement is sparse in detail, this one stating that the dead solider was a gunner from 51 Squadron, RAF Regiment. Shortly after midnight local time, says the release, personnel from the Squadron were conducting a routine security patrol around Kandahar Airfield when one of their vehicles was caught in an explosion.

For reasons which will emerge from this piece, however, we happen to know that this was a mine strike. We also know that the crew were riding in a lightly armoured WIMIK Land Rover, just as was Lance Bombadier Ben Parkinson last year, when he sustained his terrible injuries, and Guardsman Neil "Tony" Downes who was killed in June. 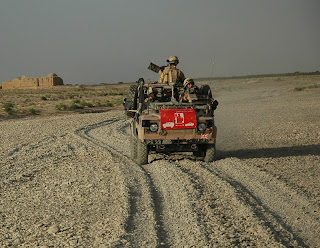 What makes this tragedy so desperately poignant, however, is a series of recent events – the details of which are too convoluted to go into here – which culminated in my being sent an as yet unpublished feature story, recently written by free-lance journalist Nigel Green. And, by a ghastly coincidence, it was about the RAF Regiment's 51 Squadron, usually based at Lossiemouth, which has been in Kandahar since April.

Carrying detailed interviews of the men of the Squadron, the men spoke of the difficulties and dangers they encountered on patrol, but also spoke of the good they were doing and how morale was "pretty good". Concluding the piece, one soldier was quoted as saying:

Attacks on the base have tailed off because of the good work we've done. We have four weeks of the tour left and the last thing we want to do is to lose focus now. That's when it can go horribly wrong. The threat is real and we have to stay focussed right up to the end.

One of the soldiers who so freely gave of their thoughts, hopes and aspirations to Nigel Green is now dead. Dead - that final word, and with him an interpreter, whom the soldiers regarded as an indispensable part of the team.

It all went "horribly wrong".

However, not only did Nigel send me his story, generously he sent three high resolution photographs (two reproduced here) of one of 51 Squadron's patrols, showing clearly the WIMIK Land Rover, in which the two personnel have since died.

Last night, in the wee small hours, having read his feature story, I studied the photographs, thinking that tracks on which they were driving were ideal ground on which to place an anti-tank mine – where it would be impossible to detect visually any disturbance. 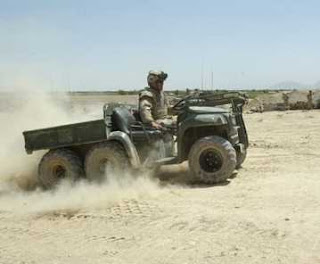 It also occurred to me that the reported recent reduction in attacks was no guide, as the Canadians found to their cost when, last June, they lost three men riding in an unarmoured, M-Gator multi-purpose vehicle (pictured). But what was both chilling and prescient about this incident was the report of Canadian journalist Paul Workman, who wrote:

…commanders obviously thought the area was safe enough to use such an exposed vehicle on a resupply mission. It seems likely that Taliban fighters were watching the Canadians and saw an easy target - an open vehicle with no armour and soldiers who were more or less defenceless against a hidden roadside bomb.

As I mulled over these issues, I recall thinking – only those few hours ago – that the soldiers had been very lucky and that it was only a matter of time before there was a tragedy. And, given the time difference, even as I was mulling over their prospects, those men must have already been dead.

The significance of that, when the news broke today, was almost unbearable. If I could see it, from my desk in a private house in West Yorkshire, what on earth were the local commanders doing sending their men out in these conditions, without the protection they need and deserve? 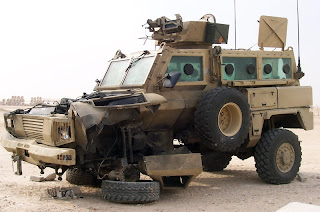 And here we go again. Within the last two days, I have written a piece about the US experience with Cougars – contrasted with the dangerously vulnerable WIMIK – and then about the life-saving Mastiff, which has protected soldiers from otherwise certain death from mine strikes. In this case, the obvious vehicle to have used would have been the RG-31 (pictured) or, perhaps the Bushmaster.

Last year, in July, I was writing in respect of the Pinzgauer Vector and its dangerous vulnerability, describing its selection as corporate manslaughter. But, what applies to Pinzgauers also applies to WIMIK Land Rovers. With their known vulnerabilities, in December 2006, I was writing that it was time to call a halt on deploying unarmoured vehicles, especially as it was then already known that the Taliban were planning to increase their use of mines, to demoralise troops (See also here).

For sure, that good men are now dead is primarily the responsibility of the insurgents. But there is no shred of doubt that, had they been properly protected, they would still be alive. Their protection is a matter for the Secretary of State for Defence, Mr Des Browne, the Minister for Defence Procurement, Lord Drayson, the Professional Head of the Army, General Sir Richard Dannatt, and the many others who regard the WIMIK as "world class equipment". These are guilty men – guilty of corporate manslaughter.

And how many more good men are they going to allow to die?