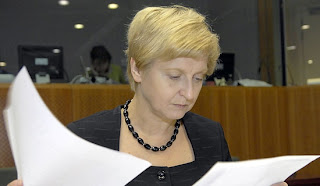 Just days after Prime Minister Kaczynski (that’s Jaroslaw) announced an autumn election, the Foreign Minister, Anna Fotyga, not the most popular lady around despite her impeccable credentials as a Solidarnosc activist, gave an interview in which she expressed the opinion that Poland was still not being treated as equal in any of the western organizations it has joined.

The list of complaints is a mixed bag. For instance, Ms Fortyga is not happy that Russia complained and Germany expressed its shock because Poland agreed to deploy the US missile shield system. Why did nobody complain about Britain or Denmark, she asks indignantly, forgetting that, as a matter of fact, the Czech Republic is also part of the system and, yes, Russia complained about that, too. But then, historically, not much love has been lost between the Czechs and the Poles.

It was predictable (and, blowing my own trumpet, I predicted it several years before we started this blog) that there would be disagreements between the older and the newer members of the EU over foreign policy, attitudes to Russia and the United States being different in different parts of Europe. And so it happened, but it does involve other former Communist countries as well as Poland.

Besides, it is rather odd to complain about not being treated as an equal when you are clearly one of the US’s closest ally and acknowledged as such by the President.

Ms Fotyga’s complaints do not stop there. After all, the EU has not taken seriously Poland’s demands that it should have as many votes in the Council of Ministers as the larger countries like Germany. We have been through that row a few times and have come to the conclusion that it was of little significance to anybody except Tweedledum and Tweedledee in their doomed attempt to hang on to power.

Other complaints are a little more complicated. There is the growing problem of German works of art that found themselves in Polish hands after the war. They were not stolen from Germany, insists Ms Fotyga, but hidden by Germans who lived on the territory that Poland acquired after the war.

While we are on the subject, the question of that territory and the expulsion of Germans from it has been raising its ugly head and that, too, is part of Poland’s grievance.

Add to this attempts by a German conservative legislator, Erika Steinbach, to seek restitution or compensation from Warsaw after Germans fled or were expelled from Poland after 1945. "In Polish minds," Fotyga said, "this means the eradication of the obvious truth: responsibility for the Second World War."

Chancellor Angela Merkel of Germany has distanced her government from Steinbach's claims. Nonetheless, the issue encapsulates the deeply sensitive relations between Warsaw and Berlin. "When you are bigger and more powerful, you have to be one hundred times more sensitive than your small neighbor, and never humiliate," Fotyga said.

So, let me get this straight: Poland is a small country and, therefore, its big neighbours should be extra sensitive to its plight. But it is a big country when it comes to wanting as many votes as its one bigger neighbour has. What would we do without Polish politicians for entertainment?