Is this really news? 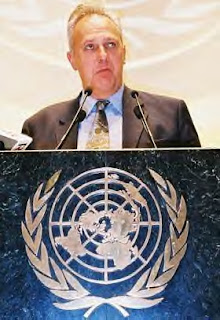 There has been a certain amount of heat generated in the MSM and, I am sorry to say, some of the blogosphere about Lord Malloch-Brown making inappropriate comments about Britain losing her permanent seat on the UN Security Council and being replaced by the EU. (By the way, what is to happen to France’s permanent seat?)

Now, as our readers know, I am always happy to have a go at Lord Malloch-Brown, George Soros’s bestest friend and interference runner for former SecGen Kofi (son of Kojo) Annan. I read the articles with interest. There was one in the Times, one in the Sun, one in the Daily Mail and one in the International Herald Tribune.

One could not help noticing a certain sameness about them. Presumably, they all mostly used AP’s report, referred to an interview on EUObserver and quoted extensively Wee William Hague, the Shadow Foreign Secretary, who seems to have made this topic his very own, as my colleague has pointed out, adding that Wee Willie does not seem to have understood the issue.

What perplexed me rather was that when I tried to follow the story back to EUObserver, I could not find it. There was no interview with Lord Malloch-Brown. I tried the search engine of the site and found that this article was published last October, that is ten months ago, when Sir Mark Malloch Brown, as he then was, produced those musings about the UN Security Council and who should have seats on it, for the benefit of diplomats in Brussels.

A quick check forward showed that it was, indeed, that story that was being rehashed. The IHT dutifully mentioned that these comments were made last year, even though the Conservative response has appeared today.

EPolitix.com was actually quite rude about it:

The Foreign Office minister made the comments, which have been unearthed by the Conservatives, in Brussels last October.

As it happens, he was not Foreign Office minister at the time but still an exalted employee of the United Nations.

Presumably the rush to produce this non-story was triggered off by Wee William huffing and puffing and demanding explanations. It might be better for the lad if he got down to some serious work in politics (or leave the Front Bench) and read the new Constitutional Reform Treaty. There is plenty there about the common foreign policy though nothing about permanent seats on the Security Council.

He might ponder over the fact that it is the Security Council that decides who can and who cannot have a permanent seat and there are countries that have been clamouring for some time: Brazil, India, Japan, to name but three. Therefore, spending some time on the treaty might be a better idea than raising bogeymen of this kind, even assuming that permanent seat was worth anything.

Mr Hague might also like to ask himself (or somebody else) how a junior member of the British government who is not the British representative at the UN is going to affect a reform in that organization?

Lord Malloch-Brown was given Africa, Asia and the UN as a portfolio with Gordon Brown who appears to be regretting the appointment already, trying to proclaim his tranzi credentials. For some reason, this has now been assumed to include UN reform, something that Lord Malloch-Brown would not be able to influence in any case.

Asking the man who ignored all warning about the UNDP in North Korea and ran interference for Kofi Annan (among other things) to deal with UN reform, even if he were in position to do so, is akin to handing a hen-house over to a particularly smarmy fox.
Posted by Helen at 01:02