It's the subtle changes, stupid! 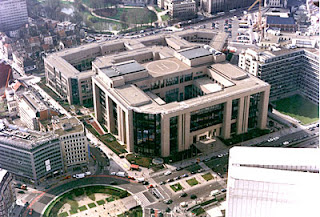 "Until now, the main criticism of the Reform Treaty has been that it tries to bring back the old draft Constitution under a new name. It now appears that the subtle changes are at least as worrisome."

So says the Wall Street Journal, commenting in the inclusion of the European Central Bank in the constitutional reform treaty as an institution of the European Union. This, the paper believes, will weaken the Bank's independence, undermining its special status.

That change, incidentally, was not in the original version of the EU constitution and, therefore, was an addition to the reform treaty – possibly at the behest of Sarkozy. Maybe the Telegraph's treatment of the story wasn't so ludicrous after all. We may owe the paper an apology.

Anyhow, in rehearsing the Trichet concerns, the WSJ underlines our own concerns about the malign effect of Article 9 (and the substantial revisions to the Union's objectives in Article 3). Furthermore, it is entirely correct to characterise the inclusion of the Bank in Article 9 as a "subtle" change, which indeed it is.

The point also must stand that the inclusion of the European Council as an institution (although the paper does not discuss this) must also weaken the independence of that body although, in keeping with the subtlety of the change, the effects will also be subtle.

In fact, therein lies much of the problem – as we have already suggested – in that few enough people can even grasp the nature of the European Council, so that fact that its status is to change is one that simply does not register. 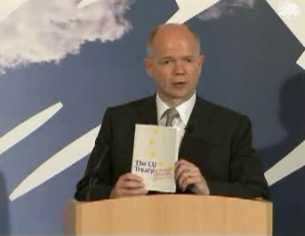 This might even be William Hague's problem. His presentation on the treaty in "plain English" is now up on the Conservative website in which he refers to the proposed permanent president chairing the "Council of Ministers", rather than the European Council. One wonders if, like so many, he does not understand the difference.

Anyhow, to return the subtlety of the effect, that the European Council will be bound by the same aims and objectives as the commission and the EU parliament will not necessarily change the way it behaves.

That much can be deduced from its extraordinary behaviour in deciding on a 20 percent renewables target at the Spring Council and its actions in June in agreeing the "mandate" to the IGC. To all intents and purposes, on both occasions, it was acting as if the proposed Article 9 was already in place.

Here, in fact, one can see the malign effect of gathering the heads of states and governments into one room under the aegis of the European Council. Separated from their own ministers and civil servants – and out of the reach of their own parliaments - they enter the febrile hothouse of the Justus Lipsius (pictured) where the rule of "consensus" applies and the pressure to conform is immense. Small wonder they already do "voluntarily" what Article 9 will require. The conditions are closer to that of a cult meeting than a gathering of members of government, where a kind of brainwashing applies.

Where the Article really comes into effect, therefore, is in providing another "stick" to use against the dissidents, big but mainly small, who might have the temerity to assert their independence. They can be sternly reminded by their conformist "colleagues" - and the new permanent president - that their "solemn obligation" is to "respect" the treaties, which require them to serve the interests of the Union.

And that, as we have so often remarked, is the way the European Union works. Article 9 turns what is in effect de facto practice into a de jure obligation. A subtle change it is indeed, but the WSJ is not wrong when it describes it as "worrisome".