Imagine this was a "Snatch" 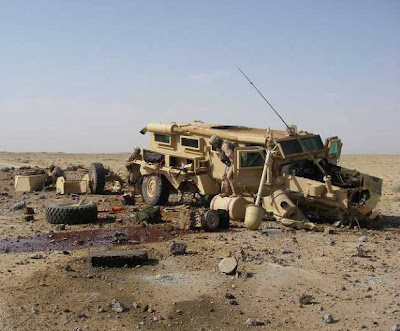 So writes one of our readers who has sent us a remarkable sequence of photographs (see also more here) of a USMC Cougar mine resistant and ambush protected (MRAP) vehicle after it had been hit by a very substantial IED in Iraq. The crew escaped with only minor injuries and no one was killed, even though the blast ripped the engine from its armoured bay and hurled it over 100 yards (see below). 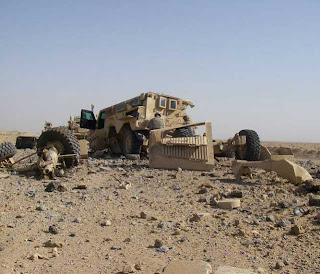 Sadly, we do not need to imagine what would have happened if the soldiers had been riding in a Land Rover. Today, the Daily Mail records the horrific injuries sustained by Lance Bombadier Ben Parkinson. He was riding in a Land Rover - not a "Snatch", but an even more vulnerable "WIMIK" - in Afghanistan when it was blown up by a landmine in September last year near Musa Qaleh in Helmand Province, while serving with the 7th Parachute Regiment Royal Horse Artillery.

In this incident, it appears that no one was killed, although it was only through heroic medical intervention that Lance Bombadier Parkinson's life was saved. Nevertheless, he lost both his legs and sustained grievous damage to his spine, skull, pelvis, hands, spleen and ribcage, leaving him in a coma for months. But, with no death, the incident was not reported by the MoD. All we know from MoD Sources is that, in that month, ten soldiers were seriously injured, of which seven came into the "very serious" category. 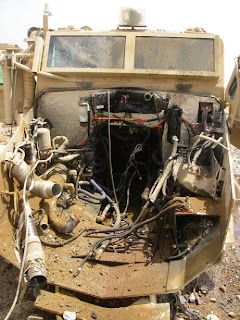 That the Land Rovers have proved dangerously fragile is evidenced by a piece we wrote in May of this year when we recorded that the Army has been losing an average of one per week of the lightly armoured WIMIK Land Rovers in Helmand and, in April, the Marines of 42 Commando lost four vehicles in a single day during an advance on Sangin. All were the victims of mine strikes. In that month of May, 38 soldiers were recorded as being wounded in action, of which 14 were "seriously injured".

Then, in June, we recorded the death of Guardsman Neil "Tony" Downes, in Afghanistan. He was riding in a WIMIK Land Rover when his vehicle was hit by a roadside bomb. Four other soldiers were injured in the incident.

Only ten days ago, courtesy of The Yorkshire Post, we were recording how soldiers were fixing makeshift armour plates to the sides of their vehicles in a bid to gain extra protection.

Despite the deployment of a small number of Mastiff protected patrol vehicles (based on the Cougar), troops in both Afghanistan and Iraq are still being killed and horribly injured in military Land Rovers, and even in the poorly protected Pinzgauer Vector. 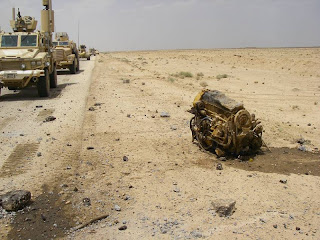 In Afghanistan, we have twice spotted the US deployment of Cougar vehicles (here and here), demonstrating their utility in theatre but, while other coalition forces continue to equip their forces with protected vehicles, only the British seem to believe that riding around in lightly armoured Land Rovers is a good idea.

It should be noted that the thrust of the Daily Mail story is about the paltry compensation Ben Parkinson has been offered for his ruined life, a mere £152,150, less than a third of the £484,000 doled out to an RAF typist who claimed she had suffered repetitive strain injury to her thumb. Rightly, the paper is bringing this to public attention and it is also right that there have been strong crusades about the treatment of our injured personnel.

I just wish, however, that a little more attention and effort was given to preventing our personnel from getting injured and killed.