Can he ignore the popular press?

It was The Sun which, as always, distilled the message down to its bare essentials – that "thousands of Labour voters will desert Gordon Brown at the next general election if he refuses to hold a referendum on the EU constitution". Thus we learn that almost a quarter of the party's life-long supporters - 24 percent - say "they will kick the PM in the ballot box unless they get a vote".

This is based on an ICM poll conducted for The Daily Mail today which gives a clear 82 percent of respondents in favour of a referendum on the EU constitutional reform treaty. Furthermore, there are only marginal differences between voters for the main parties, 80 percent of Labour and 88 percent of Tories going for the proposition.

What is remarkable overall though, is how consistent the pro-referendum sentiment remains. On 11 August, The Sun poll had 81 percent in favour. 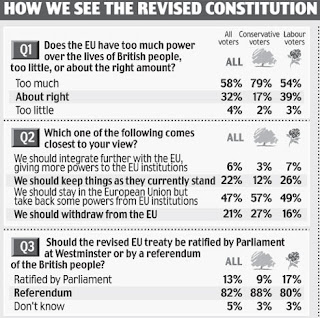 All this depends on the prospect of an early general election but the finding could mean that the prime minister will be less inclined to go early – if indeed it was ever his intention to do so. Not a few wiser heads are saying privately that dropping hints of a snap election is an excellent way for Brown to keep the Tories off balance – and keeping the political hacks occupied so that they are not looking elsewhere for their stories.

Nevertheless, the overall message to Cameron should be that the "old agenda" Labour slur has not rooted and support for an EU referendum is a potential vote-winner.

What may give aid and comfort to the Europhiles, however, is an additional finding that indicates that only 21 percent of the sample are in favour of outright withdrawal from the EU. Should there ever be a referendum, this must give a pointer to the general tactics – one can see the Europhiles arguing strongly that a "no" vote would mean British withdrawal.

On the other hand, only six percent are in favour of more integration, which would tend to suggest that a sharp focus on how this new treaty strengthens the integration agenda has to be the way forward for any "no" campaign.

Where the situation gets muddy, however, is in the finding that 47 percent would prefer to have some powers taken away from the EU (57 percent amongst Tory voters). One wonders how sentiment would be affected if it was put that exercising such an option might lead to British withdrawal, and certainly precipitate a crisis within the European Union.

The real question, though, is whether Brown will listen to the opinion polls, or simply tough it out. If, contrary to the expectations of some, he "goes long" and does not call a general election until 2010, he may be banking on the hope that the treaty will have been long ratified and will thus have become a dead issue.

It this is the strategy, much will depend on whether the Conservatives keep up the pressure in both Houses of Parliament, although there might be an even more powerful weapon waiting in the wings. According to Andrew Neil, writing in the Guardian, Brown's relationship with both The Sun and The Daily Mail will "hit a rocky patch" if he does refuse to call a referendum.

Brown might feel he can ignore the Tories but even he might have to take note of the two most popular newspapers.