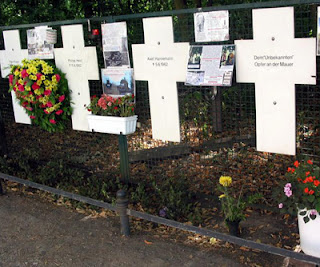 The East German authorities have always denied that there was a shoot to kill order with regards to those of their own people who tried to flee to the West. Now a document has surfaced in the Stasi files that proves that to be the case. Amazing really - why put something like this into writing?

An estimated 1,100 people were killed between 1961 and 1989 when the Berlin Wall and the rest of the border came down. Many were left to bleed to death while the West German guards watched helplessly.
Posted by Helen at 18:25