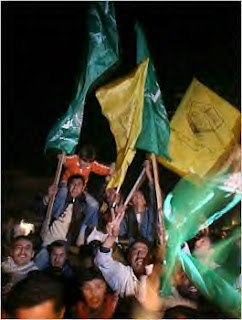 An interesting little item in the Jerusalem Post this morning (we look far and wide for the instruction and delectation of our readers): Palestinian Authority officials have told the newspaper that EU security officials have been conducting secret talks with Hamas.

There is no further detailed information although “sources close to Hamas” have confirmed this.

"We hope these talks will be the first step toward ending the boycott of Hamas, which came to power in a free and democratic election," the sources told the Post."There is growing awareness among the Europeans of the fact that Hamas can't be ignored as a major player in the Palestinian arena."

Javier Solana’s spokesperson is not exactly denying the story but saying that his office is not aware of any meetings of this kind though Señor Solana himself will soon be paying one of his routine and pointless visits to the area. (That is not how the spokesperson put it but we are justified in adding those comments.)

The Israeli government also professes itself to be unaware of the discussion.

So, what are we to make of this? First of all, it could be a complete invention or it could be that the “officials” in question are too low-grade to merit much attention. Then again, as one reads the article, one realizes that there is a certain confusion between EU and Member States.

The PA officials did not reveal the identity of the visitors, except to say that they belonged to three EU intelligence services.

So, in actual fact, these are intelligence or security officers of three of the EU Member States. Were they talking to Hamas on behalf of their own countries or, as the EU3 who had negotiated so successfully with Iran, as representatives of the Union? They love the number 3 in the EU and one wonders whether these were the representatives of the troika – previous, present and next Presidency?

Another interesting aspect of the story is the sight of the Palestinian Authority briefing the Israeli media against Hamas. “And always keep a-hold of nurse/For fear of finding something worse.”
Posted by Helen at 11:33