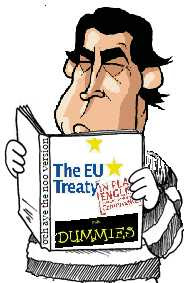 In a way, the balance of coverage on this blog reflects the real world. By preference, we would rather spend our time and (limited) energies on the issues that really matter – such as the war on terror, to which this writer devoted most of his time yesterday, and the diverse subjects on which my co-editor so eloquently writes.

But, as in the real world, other matters intrude, not least the stultifying, looming presence of the European Union and the poxy European integrationalists who, like fractious, spoilt children, demand our attention when all we really want is for them to go away - permanently.

So it is that we are dragged back, reluctantly to the spoilt brats, this time in the form of a leader from The Financial Times which, showing its true Europhile colours, is telling us that, "EU referendum calls are misguided".

It starts in true typical style, with the sweeping declaration that, "Most generals avoid fighting the last war," then grandly declaring that, "The motley band calling for a referendum in Britain on the European Union's constitutional treaty has failed to learn this." Twisting the knife, it then pronounces that, "Its campaign is misguided," magnanimously conceding that, "it deserves better than the government's fumbling response to date."

How wonderfully lofty is that grand statement, "motley band", the writer in two words describing the bulk of the British print media, the Conservative Party, UKIP and its million-plus voters, and the dozens of other organisations and hundreds of thousands of non-aligned individuals, all of whom have but one thing in common, the desire to avoid still further European integration.

A less civilised individual than this writer might want to rip the throat out of the purveyor of such a lofty phrase, and then feed it back in small chunks, through his backside. But such thoughts will never find a home in this refined and considered blog. Instead, wearily, we trudge through the leaden arguments, instinctively feeling our own readership melt away as they dive for cover at the prospect of yet more dissection of leaden Euro-guff.

As they so often do, the FT writer starts off with a straw man, with which to beat down his "misguided" opponents. According to them, we are informed, "the new treaty marks another giant stride towards a European superstate." And, of course, "This is fantasy."

Actually, "superstate" is a misleading word and, although many Eurosceptics use it, it is not given much currency here. In fact, we wish Eurosceptics would avoid it, if for no other reason than its use gives pompous Europhiles the opportunity of denial.

Venturing into that territory, though, we are advised that, "There is no provision for grand projects such as the single market, monetary union or a common foreign and security policy as set out in the Single European Act or the Maastricht treaty – neither of which attracted a referendum."

It was all a terrible mistake "in the drafting process" to promote the new treaty as a constitution per se. "The result was disastrous, seemingly accelerating the integration process at a time when the public was begging for the brake. In a moment of weakness, Tony Blair, former UK prime minister, conceded a referendum, forcing others to follow suit."

However, all is now well:

After two resounding Nos in France and the Netherlands, EU leaders have removed the trappings of a constitution. There is no more EU anthem. Brussels has a high representative for foreign affairs and security policy – not a foreign minister. Instead of spelling out that EU law has primacy over national law, the treaty merely refers to "well settled case law". Britain has won a protocol insisting that it cannot be used to challenge UK laws: this adds to UK opt-outs, including on monetary union.

Nevertheless, says the FT, "Britain's Eurosceptics are right to claim that the substance of the treaty remains largely intact." To pretend otherwise, as the government has sought to do, is disingenuous. But the treaty is a tidying-up exercise. It does not disturb the hybrid nature of the EU, which balances intergovernmental co-operation with supranational powers.

Heh! The famous "tidying-up exercise". They just can't resist it. No matter how many times you bat them down, up they pop, like one of those wobbly dolls with the weighted base, back with the same tired, lame phrases. What was that about, "Most generals avoid fighting the last war"?

Anyhow, the real lie is in the last sentence: "It does not disturb the hybrid nature of the EU, which balances intergovernmental co-operation with supranational powers." It does – it really does. But the trouble is that the moment you mention the words "intergovernmental" and "supranational", the eyes of human beings glaze over and you have lost them. People neither know nor care what you are talking about - not if they still have the will to live.

The thing is, we did the intergovernmental or "cooperation" bit way back in June 2004. What we wrote then still applies now, only in spades, with the incorporation of the European Council as an institution of the Union.

But what we are seeing is an example of the way the Europhile mind works: just keep taking the mantras. Eventually your opposition will give up, bludgeoned to death by the sheer boredom of it all.

But, the fact is, that the sequential treaties of the integrationalists are a process, one of continual progress towards the end goal of a supreme, supranational government of Europe. And that word, "supranational" says it all. It means "above the nation", i.e., superior to it. Forget "superstate". The EU is a "super-government", only it is pronounced supra. With this treaty, the Europhiles are that closer to their goal.

All the rest is fluff, but it does not deter the FT writer from coming to his leaden conclusion: those calling for a referendum, including the opposition Conservatives, claim they are acting on principle, "But their ultimate goal is either withdrawal or a do-nothing Union." Neither, we are told, "serves the national interest".

Therein, lies the ultimate paradox, and the fatal flaw in the Europhile case. The very essence of "supranational" is inimical to the interests of the "national". By its very nature, it is the diametrical opposite. Hence, the desperate need to pretend that the EU will retain "intergovernmental" characteristics.

And, being a "motley band", we are not supposed to know the difference. But, motley or not, we do. And misguided, we ain't.