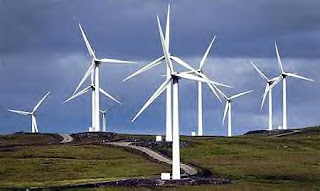 As my colleague immerses himself into the main story of the day (in Britain, anyhow) of the British troops killed by friendly fire, I thought some of our readers might like to have a look at the fact that wind power is becoming something of a problem in different parts of the world.

First a story from the United States about the Long Island Power Authority cancelling plans "to construct a 140 megawatt wind project 3 miles off the south shore of Long Island. The project's estimated costs had ballooned to more than $800 million including transmission lines."

Here are the figures and discussion of them. As Christopher Alleva says

This is a real blow to the Energy Bill passed earlier this month by the House of Representatives. The bill requires 15% of energy generation from "renewables." Renewables under the bill exclude nuclear and hydro. The bill is slated for conference committee in the fall. President Bush has said he will veto the bill because it is completely unserious about resolving the current energy situation.

Things are not looking all that hot (if I may use that expression) for wind farms in Germany either.

Der Spiegel published a piece under the delightful and hightly erudite title "Wuthering Heights" on the dangers involved in the whole idea:

After the industry's recent boom years, wind power providers and experts are now concerned. The facilities may not be as reliable and durable as producers claim. Indeed, with thousands of mishaps, breakdowns and accidents having been reported in recent years, the difficulties seem to be mounting. Gearboxes hiding inside the casings perched on top of the towering masts have short shelf lives, often crapping out before even five years is up. In some cases, fractures form along the rotors, or even in the foundation, after only limited operation. Short circuits or overheated propellers have been known to cause fires. All this despite manufacturers' promises that the turbines would last at least 20 years.

The political situation being somewhat different, there is still pressure to produce more and more wind farms, even offshore ones. But the industry is becoming wary.