We are soooo happy for them! 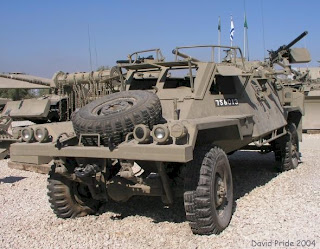 The MoD website is currently sporting one of its routine PR "puffs" to highlight its glorious activities in defence of this country.

This time it is the turn of the 3,463 chaps and chapesses from Defence Science and Technology (Dstl), with a combined salary bill of £141.7 million (enough to buy 300 Mastiffs). And, as the site tells us, "There's rarely a dull day for defence scientists as the latest annual report shows." We are soooo happy for them.

In gushing prose, the site informs us that the annual report and accounts, "highlights the importance of its scientists work to the UK Armed Forces and to national security. It also details some astonishing areas of Dstl's research."

Be prepared to be astonished. In terms of "supporting front-line activities", we are told that this "remains at the heart of Dstl's work." Would you know that:

Dstl's deployed scientists play a vital role on the front line, solving urgent operational problems and providing commanders with access to key decision-support tools. Dstl scientists have been asked to provide collateral damage advice through their unique computer modelling techniques to give front line troops options on how to reduce debris from explosions.

Well, tell that to the RAF Regiment gunner, whose death we reported yesterday and the other soldiers who have been killed by "explosions" while riding in WIMIK Land Rovers. We are sure that they would have been mightily pleased to learn "how to reduce debris from explosions".

But, if the chaps and chapesses at the Dstl can tear themselves away from self-congratulation, maybe they could just apply their brilliant brains to designing an open-topped patrol vehicle, which the Army seems so much to want, that is also mine and blast proof.

And if they need any guidance, they could just have a look at the RBY Mk 1 Armoured Car (pictured). It is airmobile while designed specifically to maximise mine protection. Furthermore, the vehicle can be armed with four pintle mounted machine guns – two more than the WIMIK. 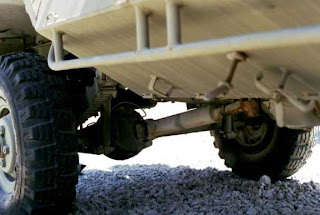 The interesting thing is that it was developed by RAMTA, a subsidiary of IAI, in 1975 – over 30 years ago. Although only 25 were built, they are still in IDF service. And if you take a closer look at the underside (pictured) you will see … the now classic v-shaped profile which is necessary to protect occupants from mine strikes.

Around the same time, under huge constraints from sanctions, the Rhodesian forces were developing their own mine protected vehicles, this one (pictured) being an example. Based on a Land Rover chassis, this vehicle was designed specifically for airfield defence, exactly the task the troops from 51 Squadron RAF Regiment were undertaking when one of their vehicles was blown up by a mine, killing one of their number and an interpreter. 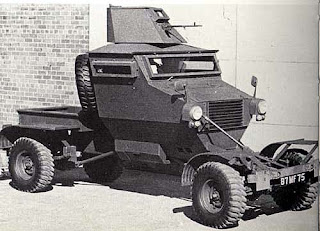 Again, although more primitive in construction, you will see the classic v-shaped profile that is now seen on the Mastiff – the British Army’s derivant of the US Cougar mine protected vehicle. And, by some strange irony, this vehicle too is called the Cougar. What comes round goes round.

The point, of course, is that vehicle mine protection technology has been around now for thirty years, and is well proven. That it is not used, therefore, is not for want of understanding, but simply that there is no will to introduce it in current vehicles. Keeping soldiers alive in mine-infested country is simply not a priority. 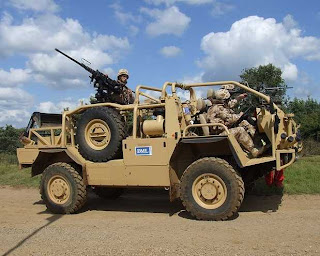 That, at least, is our attempt to rationalise the situation. On the other hand, when you see what the MoD has produced by way of a (limited) successor to the Land Rover WIMIK – the Supacat – you do begin to wonder. When we first saw a picture of it, we called it "insane". Criminal stupidity might be a better description.

Whether insanity or criminal stupidity, though, it has to stop. The MoD has had plenty of warning that the Taliban were going to use mines to murder British troops. It is now time they got off their backsides and instructed Dstl to do something useful.