Belgium is not Europe 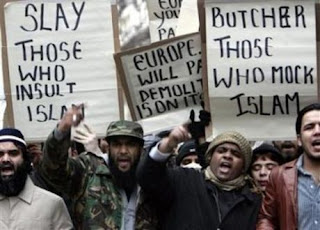 I do wish people, particularly well-meaning American commentators, such as Pamela Geller on Atlas Shrugs, would stop confusing Belgium with Europe. Belgium is but one country, not a particularly old one, created largely by the then British Foreign Secretary, Lord Palmerston, in 1830.

There is some truth to Paul Belien's thesis that Belgium is the modely for the European Union but only some. There are other parallels, such as the Austro-Hungarian Empire. (Discuss.) In any case, as Belien himself says on Brussels Journal, Belgium is well on the road to collapse, while the EU, sadly is not.

My point is that when bad things happen in Belgium, particularly in Brussels under the rule of its socialist Mayor, Freddy Thielemans (and, let's face it, we in London know what it is like to have a socialist Mayor), it is a Belgian problem, though obviously we write about it on this blog. It is not a problem for the whole of Europe. We are not playing "If it's Tuesday, this must be Belgium".

We have written about the banning of the anti-Sharia demonstration, planned for 9/11 in Brussels, about the appeal against the ban, and about a "truther" demo that is being allowed.

Now Brussels Journal tells us about another interesting development. It seems that the counter-demonstration agains the banned anti-Sharia demonstration is going ahead.

The Arab-European League (AEL), a pro-Hezbollah organization of Arab immigrants in Belgium and the Netherlands, is rallying its members to march in Brussels on 11 September “against Islamophobia and racism in Europe.” The AEL demonstration is a response to the request by the Danish-British-German organization Stop the Islamisation of Europe (SIOE) for permission to demonstrate on 9/11 in front of the European Union’s buildings in Brussels against the introduction of Sharia laws in Europe.

Paul Belien, the author of the piece, gives some helpful information about the Arab-European League and its founder.

Atlas Shrugged reminds us, as if we needed reminding, of the last time London saw a peaceful anti-Islamophobia demonstration. For all of that, Belgium's problems are hers and hers alone.
Posted by Helen at 16:44