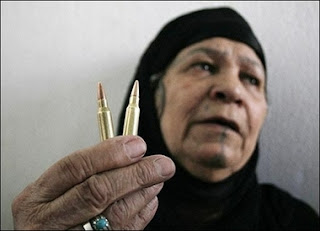 The Autonomist - and many others today, including Michelle Malkin and What the crap?, who takes the p*ss, quite deliciously – highlights the remarkable photograph produced by AFP (left), with an Iraqi woman holding up two unused rounds of rifle ammunition which, the caption says, she claims are bullets which hit her house.

What appals more than anything it the sheer technical illiteracy of the journalist (snapper) who filed the picture – unable to distinguish between unfired rounds and spent bullets that have impacted a solid object. And then there are all the "fact-checkers" in the system who are supposed to pick up bloomers like this, making sure they never see the light of day.

Still, this is no difference in quantum from the report in The Daily Telegraph last week, on the plans to deploy the Eurofighter on ground attack duties in Afghanistan. The story, as published, had it that:

For the next year RAF pilots will be training hard to fly the supersonic jets at speeds of up to Mach 2 at 100ft through narrow valleys as they prepare the aircraft for the war in Helmand province.

Just supposing the Eurofighter could get anywhere near Mach 2 at 100ft (which it can't) and the ground effect from the shock waves didn't make the aircraft uncontrollable (which they would) and there wasn't a prohibition on flying supersonic over land (which there is), would you like to hurtle down a Welsh valley at 100ft travelling at 2,000ft per second?

And we are supposed to believe the media on anything else?