Saxon Times (aka Anoneumouse) has an embarrassing question for Gordon Brown, while Tony Mahar over at Elephant Head has an electric look as Article 9.

The Tap takes a critical look a Cameron's tactics and, if you want a look at the dark side, so does Europhile Lib-Dem Jeremy Hargraves, who draws his own conclusions.

Staying on the dark side, Stephen Farrington at Don't trip up invokes Attlee in an attempt to argue against a referendum, while EUlawblog has a go at Open Europe's "big lie".

Speaking of which, the Tory research department has finally noticed that there are problems with the EU's proposal on biofuel targets, something we started running a month ago, followed by this piece, this one, this and this. 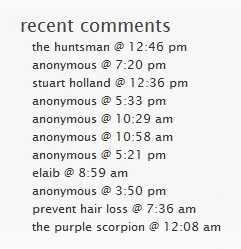 But then, Open Europe is relying on the FT blog, despite the fact that Booker did much the same story on 22 July. Perhaps they should widen their reading. If they start with their own blog comments list, they might notice a spam advert for preventing hair loss (penultimate entry - illustrated right) attached to a post dated 4 July. Give them enough time, they might notice Article 9 as well - unless it's in the "not invented here" folder. Maybe they are waiting for the Financial Times to run the story.

While we're on about part-timers, The Telegraph is running a story about the remarkably high number of Cameron's shadow cabinet colleagues who have outside interests – not least our William Hague who has two directorships, three advisory posts to a total value of more than £100,000 and a lucrative book contract.

Tim Montgomerie, from Tory Diary, suggests that it indicates that "the Conservative front bench is not as hungry for power as Labour was when it was in opposition." But Hague's devotion to his extramural interests (not forgetting his lucrative incursions into the lecture circuit) might explain his relative ignorance about the constitutional reform treaty. It could be that he isn't putting in the hours, and needs to spend more time on his day job.

Finally, for a spot of entertainment, go here to admire the efforts of Harry Panagopulos. He has started up a 10 Downing Street petition asking the prime minister "to guarantee that the British people will not be permitted a referendum on the new EU reform Treaty". It has attracted a magnificent six signatures.