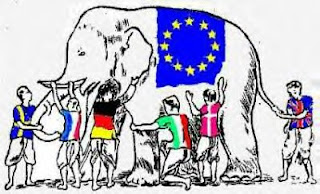 Thonton was voluble in his complaints about how western importers played off Chinese factories against each other, driving down their already wafer-thin margins – the result of which, he said, meant that "corners were cut". It was up to the importers, therefore, to check on the safety of the products that they brought into the country, he asserted.

But at no time in the interview did Mair bring up the fact that the bulk of these products bear the EU's CE marking, supposedly certifying their safety - a system which puts the responsibility firmly on the product manufacturers. So much for the vaunted "Europe of results", when the BBC isn't even aware that the beneficent EU has been toiling away on behalf of the "citizens of Europe".

Or was it perhaps that the EU's system is so utterly worthless that Mr Mair did not want to mention it, for fear of tarnishing the reputation of the Beeb's beloved project? Either way, the "elephant in the room" is alive and kicking - so what price the EU's mission statement that "Consumer policy is a core component of the Commission strategy objective of improving the quality of life of all EU citizens"?