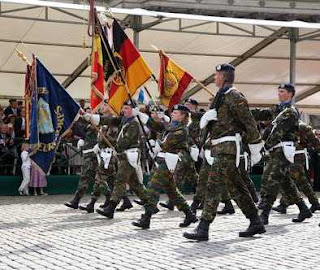 Eurocorps has been on the march, parading in Strasbourg and in Brussels, joining in the Belgian national day celebrations, "honouring the 50th anniversary of the European Community".

To enable it to complete these gruelling and dangerous tasks, Eurocorps has deployed a "multinational marching detachment", including the flags of its five framework nations.

Some 78 soldiers, NCOs and officers have been trained hard to march in perfect order and, because different nations means different kinds of drill, a specific "Eurocorps drill" is taught and co-ordinated by national Drill Control Teams. 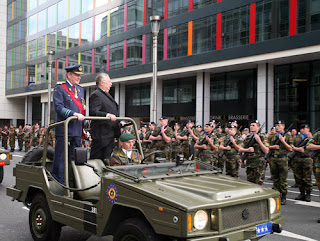 And it all came together on 21st July when the Eurocorps detachment paraded in the centre of Brussels. They waited for the departure of the parade at the "Wetstraat – Rue de la Loi" – home of the EU commission. After the inspection of the troops by the King of the Belgians, HRH Albert II, they marched through the crowded streets and in front of the royal palace, proudly showing multinationality. (No sign of the Single European Tank, though!)

After an "emotional day", we are told, the honour detachment of HQ Eurocorps rejoined its home base in Strasbourg (France) the same evening.

Aren't we so very, very lucky that we have such a fine body of men to protect us. With a "single European drill" so perfectly executed (stop sniggering at the back), the Taliban and al Qaeda must be quacking quaking in their sandals.