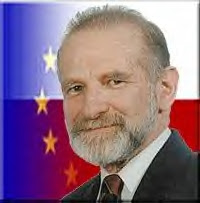 This is not a particularly new story but it is still worth blogging if for no other reason than to show that we are capable of being nice about Poles.

To start with, here is the report on UNWatch about a forthcoming event in Brussels (no, we are not talking about that demonstration) at the end of August:

Under the auspices of the UN's Committee on the Exercise of the Inalienable Rights of the Palestinian People, a "Conference of Civil Society in Support of Israeli-Palestinian Peace" will take place on August 30-31 in Belgium. These meetings are part of a round-robin of anti-Israel gatherings organized year-round by the UN's 16-member Division for Palestinian Rights. It all dates back to 1975, when these mechanisms were installed within the UN on the same day that the General Assembly adopted its infamous "Zionism is Racism" resolution. What is new, however, is the venue: the European Parliament in Brussels.

Sounds like an entirely appropriate venue. The article gives a more detailed prediction and explanation of what is likely to transpire:

What the conference will pronounce is pre-determined. Carefully pre-determined: the UN's Palestinian Division runs a tightly-controlled operation that accredits only anti-Israel NGOs and speakers. And recently they've become quite clever. Without altering the virulently anti-Israel nature of their meetings, the organizers instead seek to mask their activities — under such innocent-sounding titles as "support for Israeli-Palestinian peace." Moreover, to add credence to their cover, they invite specially approved "Israelis" — a select group of radicals who openly espouse hatred of Israel, claiming the license to do so because of their citizenship. Both tactics give conference organizers the cover they need for their allies and enablers to then use the material.

In a sense, one could write this off as another dog bites man story. UN produces a carefully orchestrated anti-Israeli conference, which will say nothing about the situation as it is in the Middle East but spend a good deal of time blathering about Israel being an apartheid state, the fence being a violation of Palestinian rights blah-blah-blah.

There will be no mention of those daily rocket attacks or of what is going on under Hamas rule in Gaza or the many violations of human rights in both Palestinian states.

So yawn and double yawn, except for the fact that some misguided individuals still think that the UN is the fount of international law and well-being and the European Parliament has any right to existence.

However, there is a twist to this story. A group of Polish MEPs, led by the redoubtable Bronislaw Geremek, who ought to have been made President of the European Parliament when the East European countries joined, have refused to attend the conference, declaring their support for Israel. Given Poland’s history, this was particularly welcome to the Israelis and, one must admit, all those who care about any possibility of democracy developing in the Middle East.

Europa 21, a Polish website reports (in English) that there is a strong move in Poland to oppose and, if possible, stop the conference taking place in the European Parliament. Gateway Pundit is following the story and gives a link to a petition to stop the conference, though why anyone should think that Members of the European Parliament are Ministers is incomprehensible.