How significant is this? 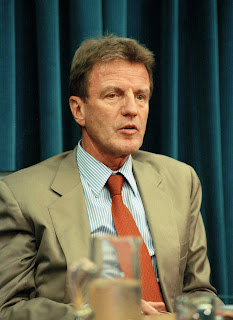 There is a good deal of excitement around because Bernard Kouchner, the French Foreign Minister is visiting Iraq. The blogs are certainly covering the story, for instance here, here and here. The Daily Telegraph even quoted an unnamed Iraqi official, who

said that Mr Kouchner was the "most important VIP" to arrive in the Iraqi capital this year, outranking earlier trips by Gordon Brown and Tony Blair, as well as Dick Cheney, the US vice-president.

You wonder where they find these officials who seem to think that Foreign Ministers outrank Prime Ministers and French politicians outrank everybody else. For all of that, this was an important visit in that it seemed to consolidate the view that the French government under Sarkozy is likely to be pro-American or, at least, not particularly anti-American.

Kouchner, himself, as we have written before, supported the war in Iraq, making himself very unpopular with the bien-pensants of France, and called Saddam what he was – a bloodthirsty tyrant.

Then again, he has not said anything shattering during his visit; merely that France must start looking at international affairs in a different way. Come to think of it, that is shattering. A French politician acknowledging that France may be wrong on something and should change its point of view? Mon Dieu, quelle horreur.

Nidra Poller publishes a round-up of the stunned French reaction to the visit that had clearly been planned in some secrecy. Among other articles

Libération reminds us that Kouchner was a personal friend of UN official Sergio Viera de Mello, killed in the August 2003 attack against the UN compound, along with Nadia Younes, Fiona Watson, and Jean-Sélim Kanan, who had worked with him in Kosovo. Kouchner, former Socialist Health Minister and one of the founders of Doctors without Borders, defends the “droit d’ingérence,” defined as the right to interfere in the domestic affairs of a sovereign nation in order to protect its inhabitants. He disagreed with France’s head-on opposition to the U.S. in 2003, and believes that if France had remained by the side of its American ally, war could have been avoided.

Le Figaro quotes Kouchner on the French solution for Iraq, which he shares with president Sarkozy. They believe that there is no military solution. The solution is in the hands of the Iraqis. The French will be glad to help, but it’s up to the Iraqis to solve their problem. We must be patient. We are just at the beginning of the end of the crisis. Kouchner laid a wreath at the monument to the UN victims, dedicated “To the soldiers of peace, [from] a grateful France.”

One cannot argue with that too much though Kouchner presumably does recognize that some military solution is necessary before the political one comes into play.

The article does not just remind its readers of the UN officials who were killed in August 2003 not least because the UN refused to accept American protection of its compound but also refers to the latest UN Resolution, adopted on August 10, which

authorises the UN mission to "advise, support and assist the government and people of Iraq on advancing their inclusive, political dialogue and national reconciliation".

It also authorises the UN to facilitate "regional dialogue, including on issues of border security, energy and refugees", and asks the UN to help develop ways "to resolve disputed internal boundaries" that are acceptable to the government.

This wonderful new Resolution, welcomed by Muqtada al-Sadr, who appears to think that there might be UN troops in the offing, which would most certainly not interfere with his militias, does not specify exactly what the UN is going to be doing in Iraq or how long it will keep its personnel there after a putative bomb attack. Come to think of it, there is no explanation whether the UN personnel will ever get out of the Green Zone in Baghdad.

The question we need to ask about all this activity, what with President Sarkozy lunching with Bush and Foreign Minister Kouchner making friendly noises in Iraq is whether any of it is significant in the long term.

It has been our contention on this blog that under President Sarkozy there will be changes in foreign policy but not all that many domestically because there are too many vested interests intent on keeping matters just as they are. So far, nothing has happened that has made us think we ought to change that line.

Appointing Bernard Kouchner, as we said at the time, was definitely sending a message to the world and, in particular, to the United States just as Gordon Brown appointing David Miliband and Douglas Alexander was sending out a message, though this seems to be rather a muddled one at the moment.

We tend to assume and are usually right to do so that, no matter what happens temporarily, the Americans will realize that of all European countries, Britain is the one whose interests are closest to her own and is likely to stay its staunchest ally. The special relationship has survived various ups and downs and will, we hope, continue to do so. When a man of John O’Sullivan’s calibre argues so, one must pay attention.

However, it is also worth thinking of the other developments. Firstly, the anti-Americanism that the media and Brown’s government taps into. It does not come solely from the left but is widespread on the right as well and, curiously enough, very widespread among eurosceptics, particularly those who have a very weak grasp on reality.

Then there is the ever closer union, which manifests itself in defence procurement as my colleague has written about on many many occasions. The tendency to support the absurd notion that there is such a thing as a “European interest” can be only harmful.

The United States is, naturally enough, looking to allies in different parts of the world and most of these are Anglospheric countries, like Australia and India. Europe is of ever smaller importance from the American point of view and, as a consequence, who precisely is the closest ally in Europe may become an unimportant question. If Britain, then Britain, if France then France, while Gordon Brown, David Miliband and Lord Malloch-Brown play silly-bugger games.